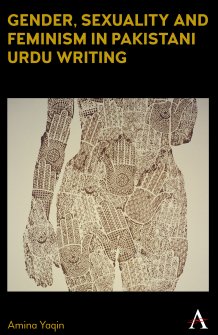 Radical new female writers and performers are transforming Urdu from being a “genteel” language and using their work to call for changes to gender roles in Pakistan, a major new study shows.

Different voices have emerged in the twenty first century from women’s protest marches to rap artists on the streets of Lyari in Karachi to take Urdu expression in new directions. In recent years, the aurat march protestors have begun to reconstruct a gendered Urdu language taking it toward new directions using the slogan ‘mera jism, meri marzi ’ (My body, my choice) while, Eva B, a female rapper from Karachi brings both her Baloch background and her identity as a niqab-wearing woman to the fore in her rap song ‘Gully Girls’. Her work captures the darkness of city life in a ghetto of gangland culture, drugs and poverty. They are the successors to a longer history of women’s resistance in Pakistan.

Gender, Sexuality and Feminism in Pakistani Urdu Writing, published by Anthem Press, by Professor Amina Yaqin from the University of Exeter, charts the development of female poetry in Pakistan during the twentieth century. It shows how this period saw a unique chapter of progressive women’s poetry unfold alongside the more radical group of prose writing.

The creation of a new nation, and a new type of Pakistani women, led to poets reflecting the traumas of partition and “self” in a new way. Their work was secular, influenced by alternative middle- class values that embraced intimacy, sexuality and opposition to the military state’s affiliation with the conservative Jamaat- e Islami party. Writers felt displaced from left and right politics.

The book shows the influence of the Deoband and Aligarh schools of reform and their influential foundational Urdu texts on these writers.

Professor Yaqin analyses controversial short stories from Saadat Hasan Manto and Ismat Chughtai to illustrate how the open stance toward sexualities in their writing continued to disrupt the status quo. These writers were censored, unlike the poet Faiz Ahmed Faiz, who used his work to successfully convey the politics of social justice to the public.

The study picks up the story of progressive women poets in Pakistan to try and understand their response to emerging dominant narratives of nation, community and gender. How did national politics and an ideological Islamisation that was at odds with a secular separation of church and state affect their writing?

In the middle of the twentieth century, the migrant poet, Ada Jafri adapted classical metaphors to communicate turmoil. Zehra Nigah caused a sensation amongst mushaira audiences with her performances and mastery over the lyric form. Her genteel poetic voice brought a new articulation of women’s silences.

During this period Urdu poetry was no longer the preserve of the elite and began to reflect the experiences of a rapidly changing socio-political environment.

The book shows how progressive women’s poetry reached its zenith in the 1970s and 1980s with the writing of Fahmida Riaz and Kishwar Naheed, whose work captured the personal and the political, and generated debate, disagreement and censorship. Their life and writings reflect the tensions and closure of the left in Pakistan, the strong affiliation of the women’s movement to left alliances and a resistance to the military state. They showcased female sexualities in a new way, and subverted stereotypes, using their work to call for change.