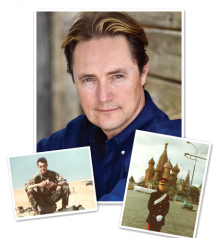 Author, actor and soldier Richard Lyntton gives inspirational example of the power of languages at University of Exeter event

Actor, author and soldier Richard Lyntton showed how he is an inspirational example of the power of learning languages at a University of Exeter event. In a varied career he used his language skills when serving in the Yugoslav civil war and acting in films such as Creed and The Equalizer.

Mr Lyntton’s passion for languages began as a teenager and developed as a student at the University of Exeter where he studied Russian and German. As part of his degree he spent a year at the Moscow State Linguistic University.

After Exeter Mr Lyntton attended Sandhurst. He served as a Captain and tank commander in the British Army in the first Gulf War and European Community Task Force Humanitarian Liaison in Russia. Following this he served as a United Nations High Commissioner for Refugees Liaison Officer, during which time he was abducted by warring factions, and then a United Nations Military Observer in Sarajevo, Bosnia while the city was subject to heavy shelling and NATO airstrikes. The army had previously arranged for him to learn Bosnian, which was invaluable in the field.

Mr Lyntton was called to testify at the International War Crimes Tribunal in the Hague after witnessing and filming human rights atrocities and abuses in Bosnia. His films are archived at the Imperial War Museum, London.

At the Languages in a Global World event, Mr Lyntton described an uncomfortable meeting over Sunday lunch with former Bosnian leader of Radovan Karadžić, later convicted of war crimes, and witnessing the confusion and chaos in the region before civil war began. He was later hired as an assistant director on the film Welcome to Sarajevo, not least because he spoke Bosnian.

During the war he was responsible for managing food aid being delivered to warehouses, and described a terrifying moment when the front, or confrontation, line of the conflict had moved overnight without him knowing. This meant he and his team had crossed into Bosnian Serb territory by mistake. Mr Lyntton persuaded soldiers he wasn’t a spy – after eight hours of interrogation.

Mr Lyntton, who lives in Philadelphia with his wife, interior designer Michelle Wenitsky, and their two sons, told the audience: “I find when I speak a foreign language my inhibitions go away, acting becomes easier – for some reason it feels more natural.

“Having another language makes travel 100 times better, and it just feels better to be speaking in a foreign language when you meet people abroad. Don’t be afraid to learn a language, or more languages, you’ll never regret it.”

Mr Lyntton was in conversation with Deputy Vice-Chancellor for Global Engagement, Professor Mark Goodwin and Professor Katharine Hodgson, Professor in Russian. He was introduced by University of Exeter Vice-Chancellor and Chief Executive, Professor Lisa Roberts, and Professor Melissa Percival, Associate Dean for Global in the College of Humanities, led a question and answer question featuring queries sent in from pupils at partner schools of Exeter’s Department of Modern Languages and Cultures.

Mr Lyntton spoke about how he found it easier to learn a foreign language while young, and encouraged the audience to learn 20 new words a day and “put the hours in”. Watching foreign films and television without subtitles and reading foreign language newspapers made learning easier.