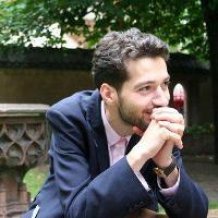 New research examining the work of three sages from India, Byzantine Empire and Scotland will show how thinkers linked natural philosophy with theology.

Dr Ionut Moise, from the University of Exeter has been awarded a Fellowship from the British Academy to continue his research on Candrānanda (8th AD), Maximus the Confessor (7th AD) and Duns Scotus (13th AD).

During a three-year fellowship, Dr Moise will publish a book and develop his interdisciplinary teaching which links natural philosophy (particle metaphysics) with theology. He will show the impact which the three medieval philosophers could have upon the widely misunderstood existential, social and ideological pluralism of today’s world.

Candrānanda, who lived in the 8th century India, wrote only one book but little is known about his life. His scholastic commentary was discovered 500 years after he wrote it, and the manuscripts of his seminal philosophy are still preserved in Indian libraries. He viewed the world in different categories – substances, qualities, motions, atoms, mind, time, space, and even vacuum, all of which characterised by an ultimate particularity called ‘distinction’ (viśeṣa).

Duns Scotus was a Scottish philosopher from the 13th century educated at Oxford and Paris, and taught and commented on Aristotle. Unlike earlier and later scholastics, he believed in an undivided reality made up of things of an unknown quantity called haecceitas (‘thisness’), a view resembling closely Candrānanda’s pluralism.

A comparable pluralistic view can be met in the theological writings of Maximus the Confessor, sometime a secretary of Byzantine Emperor Heraclius (c. 575-641); Maximus saw the world as fundamentally intertwined between one ‘Logos’ and infinite ‘logoi’ who stand in a relationship of interdependence.

Dr Moise said: “These three philosophers have not been put in conversation before, but I believe a comparative philosophical project like this can supply a new pluralistic interpretation of reality with relevance and applicability in many current areas: theological metaphysics and theoretical physics, inter-religious dialogue, philosophical existentialism, and cultural anthropology, to name but a few. Through Comparative Philosophy, I intend to create an interdisciplinary conversation using data from both philosophy and theology, as well as theory of science (particle metaphysics).

“This method of teaching and research which I call Comparative Philosophy is thrilling because my students will be able to travel through three different cultures, and start to see patterns of thought and think globally. They will come to know that ancient traditions are an organic part to their modern science-based and philosophical research.

“All three philosophers agree that one single reality was essentially and fundamentally plural in its origin, and its unity depended very much on the knowledge of this rock-bottom pluralism”.