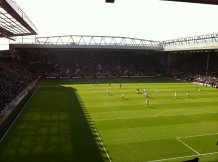 Liverpool Born Football Poet, Sharon Jones has written a moving tribute to Anfield and Liverpool FC as part of a national Places of Poetry project.

A film of the poem has been released today to mark Liverpool’s Premier League title win: https://youtu.be/PQBc2oFiCvs

It is nearly 30 years since Liverpool last won the league title under manager Kenny Dalglish and Sharon reflects on both the long wait and the glory years of her youth. She writes:

“Anfield is my heartland…Anfield my Jerusalem, Dalglish my arrow of burning desire.”

“Anfield is my Haworth where Heighway / Not Heathcliff thrilled my soul’.

The Places of Poetry project has inspired thousands of poets to write about a favourite location and pin their poem to a beautiful digital map of England and Wales: from iconic historical sites to places of personal significance. The project has been supported by some of the country’s most innovative and well-known poets: https://www.placesofpoetry.org.uk/

Sharon chose Anfield and her passion for the place, the club, the people and the memories – including of her own father – shine through every line.

Anfield my landscape of clashing boots
My corner of forever Liverpool
The labyrinths of pass and move
The crowds who gather in songs with dreams
And if I am now exile and rootless
Then I still know the road home
Its river of rhythms well known
Where life flows on within me
And I meet with my father again
Each Anfield Saturday afternoon.

You can listen to the poem in full here: https://youtu.be/PQBc2oFiCvs

Places of Poetry is inspired by the epic poem of English and Welsh national description, Michael Drayton’s Poly-Olbion (1612-22) and the project has been led by the poet and Radio 4 regular Paul Farley of Lancaster University and the academic Professor Andrew McRae at the University of Exeter.

The project is funded by the Arts and Humanities Research Council, The National Lottery Heritage Fund and Arts Council England, and has been made possible by partnerships with the Ordnance Survey, The Poetry Society and National Poetry Day.

Paul Farley, who is also a lifelong Liverpool fan and child of the city, pinned his own much-loved poem ‘Liverpool Disappears for a Billionth of a Second’ to the map. Paul said:

“The Places of Poetry project has been unpredictable, addictive, and one of the great pleasures has been the zooming in and zipping across the map to see what each day brought, every new crop of different voices and viewpoints. They celebrate. They lament. They evoke. Sharon’s Anfield poem beautifully encapsulates everything places of poetry is about and I am delighted it’s release now marks a new chapter in the history of Anfield and Liverpool FC.”

Andrew McRae at the University of Exeter said: “Poetry has been used across the centuries to reflect on places and their histories. We have used modern technology to innovate and inspire new poetry and it has been a pleasure to read about the places that matter to poets young and old, experienced and new, in these most extraordinary times.”

Places of Poetry has now closed for submissions but the map of poems remains online: https://www.placesofpoetry.org.uk/

An anthology of poems submitted to the Places of Poetry project, including Sharon’s ‘Anfield’, will be published by Oneworld in October 2020.

Sharon Jones recently published a book of football poetry ‘A Wall, A Ball & The Grace of Football’ available now and which includes the poem ‘Anfield’.