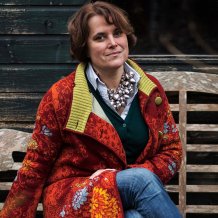 Acclaimed novelist, memoirist, poet – and University of Exeter creative writing expert – Professor Vesna Goldsworthy has been elected a fellow of the Royal Society of Literature.

Professor Goldsworthy is the author of six internationally best-selling and prize-winning books which have been translated into sixteen languages. Two -- Chernobyl Strawberries, a memoir, and a novel, Gorsky -- were serialised by the BBC. She joined the University of Exeter in 2017 and is Director of Creative Writing, working during the past four years to develop a new degree pathway in creative writing and a new MA programme.

Professor Goldsworthy, one of 44 new RSL fellows, hopes to sign the Society’s Roll Book with the quill used by Lord Byron, about whose Balkan connections she has written in her first book, as soon as an in-person ceremony is possible.

The Royal Society of Literature (RSL) is the charity that represents the voice of literature in the UK. To be nominated a writer must have published two works of outstanding literary merit. Nominations must be seconded by an RSL Fellow or Honorary Fellow.

Professor Goldsworthy, who moved to the UK from the former Yugoslavia 35 years ago, began writing after a career as a journalist at the BBC and an English Literature academic. She switched to creative writing when, during a period of illness she wrote her life story for her son. She writes in English, her third language.

Professor Goldsworthy said: “I’m delighted to become a fellow of the Royal Society of Literature. The endorsement from my peers is very special, and means a lot more to me because I’m not a native English speaker. I didn’t start writing creatively in English until I had been living here for two decades, and it was not something I originally thought I would do.

“I started with a memoir, because I was very ill, and that became a bestseller and translated across Europe, so I changed disciplines and began teaching creative writing. I enjoy this because it allows me to be part of the writing community, and pass on knowledge and skills.

“I try to show students how hard it is not just to have creative ideas but to finish work, and get it published. I tell them that that rejection is often temporary so they need to persist and develop courage and endurance.”

Dame Marina Warner, President of the RSL said: “There is cause for celebration in spite of the horrors of the last year: 44 new fellows and honorary fellows have been elected to join us in 2021. As president and on behalf of the whole fellowship, I congratulate and welcome them all very warmly indeed. Everyone in the RSL is delighted by the range and brilliance of their work, and looks forward to saluting them in person as soon as we can. During lockdown and its aftermath, books – in every format across media - have proved a lifeline for thousands of readers and, in spite of the difficulties for many of us, public awareness has grown about how much literature really matters.’

Daljit Nagra, chair of the RSL, said: “In everything we do, the RSL works to bring writers and readers together, to draw people together in a shared love of literature, and through that sharing of great writing to enrich each other’s lives. The new fellows and honorary fellows announced, alongside our reading together programme for young people, all pay testament to the vitality of writing in the UK and give a sign of what literature can do to shape society, and to change lives.”