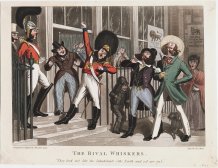 The mid nineteenth century was the age of the ‘beard movement’, a time when huge beards suddenly became all the rage, as the ultimate badge of manliness. But new evidence shows there was also a long-forgotten earlier mania for whiskers.

So keen were men to take part in this new craze for extravagant sideburns that they were prepared to suffer ridicule and abuse, and even donned fake whiskers, a historian has discovered.

Dr Alun Withey, from the University of Exeter, has identified the passion for sideburns among young trend-setters in the early 1800s. The fashion was so popular it was reported that even women were drawing on false whiskers and training their hair to grow down the side of their faces.

Dr Withey said: “Whiskers quickly became an essential accoutrement to any young man – or “young buck” as they were described - with social pretensions. By 1812 the trend was apparently in full flower, and certainly appears to have been popular in London.”

One correspondent to the ‘Tradesman, or Commercial Magazine’ in July that year professed astonishment at the ‘spreading proportion of hair on the human face’ he witnessed there, describing it as nothing less than a ‘whiskered mania’ which had ‘very far over-stepped its bounds’.

The new trend quickly spurred a market for various lotions and potions to help men care for their whiskers. Products such as ‘Russia Oil’ claimed to make hair ‘grow thick and long, even in bald places, whiskers, eye-brows &c’. In 1807, perfumer John Chasson of Cornhill, London, advertised his ‘Incomparable Fluid’, for changing hair, whiskers and eyebrows from grey or ‘red’ to ‘beautiful and natural shades of brown and black’. By 1815, the number of such preparations had proliferated.

Not only this, false whiskers could even be added to wigs via a system of springs attached to the head. In 1802 the London “perukemaker” Robinson of Portman Square began to advertise his ‘Natural Spring Wigs’, which were available ‘with or without whiskers’.

Females were also not left out. Several fashion journals, such as the popular ‘Le Belle Epoque’, also reported a trend for ladies to train their lovelocks down the side of their faces ‘in imitation of whiskers’. Another advertisement by Chasson suggested that some women took to using pencils to draw whiskers on their cheeks. The “Tricosian Fluid” was advertised as being useful for women who wanted to dye their eyebrows and whiskers.

Dr Withey said: “Whiskers were part of the recognised ‘uniform’ of the dandy, the young metropolitan elite. Like beards, those who sported them thought it added to their masculinity, making them seem stronger. But the variety of products on offer show that perhaps older men, and even some women, wanted to join the trend.”

But just like the recent beard trend, whiskers also divided opinion. Lovers of facial hair were accused not only of having suspect political affiliations or being of dubious moral character, but of appearing “monstrous”.

The continental origins of the trend left whisker-wearers open to the anti-foreign sentiment in England at the time. Looking French or German was risky! In 1810, a group of the 15th Light Dragoons were attacked and abused whilst riding in London, by a mob mistaking them for German soldiers because of their whiskers. In 1851 the bearded and moustachioed Army soldier ‘C.S.’ complained to the Leader and Saturday Post of being mocked and physically attacked on the streets of London for his facial hair. C.S had to endure a hail of stones and gravel, was refused entry to a shop, and called a ‘French Dog’.

Whilst some women did appear to embrace the fashion, others were not so sure. In 1800, Lady Melesina Trench was unimpressed after seeing a French minister’s whiskers, noting in her diary they “contributed to the dinginess of his appearance”. In 1811, Lady Sydney Owenson entreated her husband not to grow his whiskers too long, even including two caricatures of him with whiskers in the current style.

“But they carried out regardless, slathering their precious facial hair with ointments and lotions   until the fashion slowly diminished in the 1820s.”