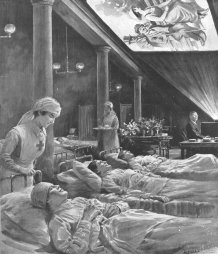 Those running hospitals and cinemas believed films could be a therapeutic aid to help soldiers forget their horrific experiences.

Thousands of wounded World War One soldiers sent to see films as rehabilitation after returning from conflict, study shows

Cinemagoing was used as rehabilitation for thousands of soldiers returning from World War One, a new book shows.

Cinemas were set up in convalescent hospitals, and free film screenings ran in cities, towns and villages especially for those who had served in the battle.

Those running hospitals and cinemas believed films could be a therapeutic aid to help soldiers forget their horrific experiences. They also provided recreation for those with disabilities.

Cinema on the Front Line, by Dr Chris Grosvenor from the University of Exeter, shows how convalescent soldiers became a familiar sight for the British public in commercial cinemas. Many convalescent hospitals boasted their own cinemas could rival those in commercial theatres.

Thousands of wounded men were routinely invited to cinemas across the country, frequently on behalf of the venue’s manager, where they were treated to a free programme of the latest films and other entertainments. They were given free transport and refreshments, such as tea, chocolate and cigarettes. Many of these events were advertised as being personally financed by cinema managers or owners.

The Kinematograph and Lantern Weekly, wrote about the work of Mr Ellis Parker, the managing director of the Stockwell Palladium, who ran a “weekly treat of pictures, song and story, with an incidental tea and smokes, given by him to two hundred warriors who are inmates of the Wandsworth General Hospital”.

Dr Grosvenor said: “Throughout and after World War One many people believed cinema could offer a form of escapism and comfort and should be used as part of rehabilitation as a therapeutic aid for the returning wounded. Commercial cinemas offered screenings for soldiers as a reward for their actions and sacrifices

“Many hospitals and convalescent institutions introduced or implemented their own purpose-built and often permanent cinemas. They were a makeshift affair, largely orchestrated by volunteers, often spearheaded by the patients themselves and supported by the patronage of donors.”

Some film distributors supported these burgeoning, DIY cinemas themselves, undoubtedly keen to secure some good publicity. The convalescent cinema of the Ontario Military Hospital, Orpington, Kent, was supported with donations from the New Agency Film Co., the New Bio Film Co. and Jury’s Imperial Pictures, all of whom lent their films free of charge.

The convalescent cinema of the 1st Southern General Hospital, Birmingham claimed that their picture ‘is the equal of any in the city, in steadiness and clearness of focus’. Hospitals used “ceiling cinemas” for those confined to their beds.

Comedy films came to be seen as a remedy for those who wanted to forget the horrors of the war. “Four hundred happy wounded warriors” were said to have “forgot their hurts” when they were treated to a programme of films by the Essanay Film Company at the Savoy Hotel in November 1916, where the venue was said to echo with “spontaneous laughter and lusty applause”.

During this period medical authorities were in a continual state of debate over the best courses of treatment for convalescent soldiers. Some advocated amusement and enjoyment, others said it was dangerous to encourage “forgetting”. One soldier who was said to be recovering steadily from shell shock was permitted to view a cinema which showed an aeroplane in action’. As it seemed to fly near and to grow large, a bomb was dropped, and as it landed, in order to make the scene more real, a drummer in the orchestra hit a resounding peal on the bass drum, and the patient, taken unawares, promptly became aphonic, darted out of the theatre in a dazed condition, and was brought back to the hospital in a worse neurotic state than in his first attack. This relapse lasted 36 hours.

ln 1916, a scheme “whereby disabled soldiers will be given special training and helped to find employment in the Cinematograph Industry” began. Later organized as the Cinematograph Training and Employment Bureau, the scheme operated branches in a number of cities across the United Kingdom, including London, Cardiff and Glasgow. Across various volunteer-led training facilities, disabled ex-servicemen were prepared for a variety of tasks including managerial or assistant roles, whilst others were trained to be projectionists. It is difficult to ascertain how much the scheme accomplished. Many of the reports found in the trade papers allude to only a handful of men who had completed the scheme and who ‘were now progressing very favourably’ within the exhibition sector.