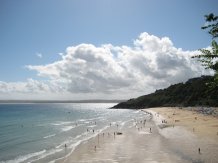 Long before Carbis Bay (pictured) was chosen as the location to showcase modern Britain to the world, another increasingly-powerful leader hosted an important gathering in the area.

The imminent G7 meeting in Cornwall is not the first time leaders have taken advantage of spectacular settings in the South West to boost their political fortunes.

Long before Carbis Bay was chosen as the location to showcase modern Britain to the world, another increasingly-powerful leader hosted an important gathering in the area.

More than a thousand years ago, Æthelstan summoned the most important people in England and Wales to Lifton, near the Tamar, in November 931. He had set the border between Devon and Cornwall here three years before, and made repeated visits to the South West.

At the time, the Cornish had their own language, customs and culture, but because of the actions of the king they were becoming slowly integrated into England.

Æthelstan, who reigned from 924 to 939, seems to have ordered – or made sure – influential Welsh kings attended the meeting. The gathering is known about by historians, but analysis by Dr Levi Roach from the University of Exeter shows the significance of the choice of Lifton for the first time.

Æthelstan is the first king recorded as holding these sort of diplomatic meetings as a way of formalising his control over neighbours. This was apparently a follow-up to a similar meeting in Exeter in spring 928.

The Welsh kings - Hywel Dda of Southwest Wales (or Deheubarth) and Idwal of Gwynedd (in the north) were the most powerful in the country. They had already been in attendance at the Exeter meeting, perhaps because their realms were near.

Lifton was part of an important royal estate, charged with oversight of Crown income in Cornwall. It was the furthest south any king had held court.

Dr Roach said: “Lifton wasn’t a city or even a town, so it’s no coincidence this location was chosen. Æthelstan was hardnosed. He knew exactly who he wanted to attend official events in order to show strength. He seems to have been excellent at forming alliances and encouraging people who could have been enemies to be pragmatic.

“In 933 when Æthelstan attacked Scotland he took with him Welsh kings, perhaps to show his strength (or so they couldn’t create issues in Wales). He had already dominated the North from 927 onwards, making his way down through the midlands to Exeter, accompanied by the Welsh kings, where he formalised control of the South West in spring 928.”

Much is unknown about how Cornwall was governed at the time, save that it was a peripheral part of the realm. Until the first half of the 9th century, the county had had independent rulers, before the more powerful kings of Wessex in southern England became dominant.

Dr Roach said: “At this moment it must have seemed to Æthelstan that a new Britain was forming, and he was confident to call himself “King of all Britain” in documents.”

There would have been Cornish attendees, but, as was usual, only the most powerful participants were recorded, as amongst these Conan, the local bishop of Cornwall. Also present were the Archbishops of Canterbuty and York, and many other bishops, abbots other members of the nobility.

The gathering would have been lost to history if a charter – dealing with land in Wilshire  – hadn’t been issued there. For many years, it was held at the Winchester Cathedral archives, and is now at the British Library.

Those at the meeting probably stayed in tents – then valuable possessions often found in the wills of the rich and powerful. The king himself may have stayed at a more formal residence. Æthelstan lived a nomadic life, moving from place to place, mostly in Wilshire, Hampshire, Dorset and Somerset.

Æthelstan is considered to be the first ruler of the whole kingdom of England. He was the grandson of King Alfred of Wessex and the son of King Edward the Elder. First proclaimed jing of the Mercians in 024 he was crowned king of Wessex (southern England) after his half-brother Ælfweard died.

He then worked to expand his realm, forming strategic alliances with other rulers and securing powerful allies. This led to him gaining greater control over the Midlands, East Anglia, the North and South West and his use of the title ‘king of English’. Welsh and Scottish leaders also obeyed his orders. In some documents he described himself as ‘king of all Britain’.