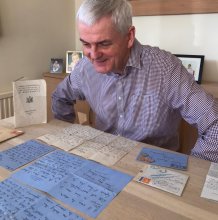 Newly discovered letters show Thomas Hardy’s second wife’s joy and happiness at her marriage, and her sadness and loneliness after his death.

While Hardy’s early romance with his first wife, Emma Lavinia Gifford, forms the background to a number of his novels, and was the inspiration for over a hundred of his poems, including the elegiac ‘Poems of 1912-13’, his marriage to Florence Dugdale has received less attention.

In the three letters Florence writes about how her marriage is a “genuine love match” and how her husband is “one of the kindest, most humane men in the world”.

They were written to Harold Barlow, whom Florence had taught.  They had been kept by Harold’s daughter, Josephine Barlow, and were discovered by his grandsons Ian and Colin Nicol. Ian recently passed the letters to Professor Angelique Richardson, from the University of Exeter, who is leading the Hardy’s Correspondents Project, where letters written to Hardy are being digitised and put on a website for people to read.

The first letter was sent to Harold on February 10, 1914, not long after Florence’s marriage to Hardy. Harold, then 23, the son of an electric wire-maker and a housemaid, had written to Florence about his new life in Africa.

In her reply Florence wrote: “Perhaps you have read, if you have the English papers, that I am now the proud and very happy wife of the greatest living English writer – Thomas Hardy. Although he is much older than myself it is a genuine love match – on my part, at least, for I suppose I ought not to speak for him. At any rate I know I have for a husband one of the kindest, most humane men in the world.”

Florence also wrote about how she was weary of celebrity culture and the media: “Accounts of me & my portrait have been printed in every paper, I think, in England. I have been shown in the Cinematograph, written about all over America & Europe. I am tired of this publicity. I will send you a paper or two I think if you care to see them”.

Florence, who was a children’s writer as well as a teacher, had been introduced to Hardy late in 1905. By 1910 she was typing up a novella, “The Maid on the Shore”, by Hardy’s first wife, Emma Lavinia Gifford. Emma had also written “The Inspirer”, about a woman who inspired her husband’s novels.

Professor Richardson said: “It is rare to find such significant letters. They give an intimate glimpse into life at Hardy’s home, Max Gate, and the loves and losses Florence shared with Hardy. It also shows us more about Florence, how self-deprecating she was and how devoted she was to her husband.

“We are very grateful to Ian and Colin Nicol for sharing these with us, and delighted they can now form part of the collection at Dorset Museum, and be seen on the Hardy’s Correspondents project website.”

The second and third letters to Harold were written eighteen years later, in 1932, when Florence was a widow of fifty-three, and Harold, forty-one, was living in Limbe, Nyasaland, with his second wife and their young daughters.  Harold had been briefly married to Lily Dowden who, a few months after their marriage, travelling separately to Africa, was one of the 143 passengers who died when the S.S. Galway Castle was torpedoed by a German submarine in September 1918. Florence said she had found Harold’s letter “most vivid & interesting” and that she would like to know more about his present position, and “what career you chose for yourself”.

Professor Richardson said: ‘Reminding Harold of his ability to write, Florence emphasizes his “unusual literary gift” and seems to see reflected in him something of the trajectory of her late husband: “you could have a career as a writer did you care to give your mind to it”.’

Of her own loss, Florence says: “I am writing this late in the evening alone, in the room where I first met my husband. A little French bull-dog is snoring by the fire – he is my faithful – & generally my only – companion.”  And later: “I thank you for your kind words of sympathy about my great loss. It was such a wonderful thing to live in close association with that great mind & that noble personality. After having lived fourteen years with such a companion it is little wonder that I feel intolerably lonely – & find the world very empty.”

Professor Richardson said “Harold’s younger daughter, Josephine, aged sixteen, wrote movingly to Florence, in 1947, full of admiration for Hardy. But with Hardyan poignancy the letter arrived too late and was returned to the sender. You can see the words ‘house empty’, written in pencil on the envelope by a postal worker.”

Ian Nicol said “I am delighted that the letters are joining the Hardy Collection.  This would have meant a great deal to Josephine, to my mother and, I’m sure, to Harold.”

Director of Dorset Museum, Dr Jon Murden, said: "This is a wonderful discovery and we are very grateful that the letters have been donated to the museum".

The letters will be placed with the rest of Dorset Museum’s Hardy Collection when the museum re-opens after National Lottery Heritage Fund redevelopment.