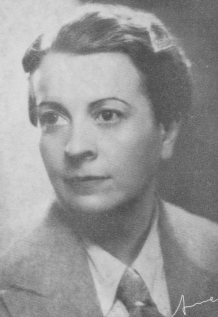 A secret autobiographical novel by one of Spain’s most-loved authors inspired by her hidden sexuality has been translated into English for the first time.

Elena Fortún wrote the iconic series of children’s books Celia and her world between the 1920’s and the 1950´s. She also wrote, typed and bound the lesbian autobiographical novel Hidden Path, which she was too afraid to have published.

Decades later, Oculto sendero (Hidden Path) became a bestseller after it was rediscovered by Professor Nuria Capdevila-Argüelles, from the University of Exeter, and published in Spain. Now it is finally available in English, translated by Swan Isle Press.

In the book, Fortún, who was married, writes about her gradual understanding of her homosexuality which, in tune with the times, she saw as an “inversion”. Her friends didn’t carry out her instructions to burn the book after her death. Oculto sendero is similar in style to the famous gay novel The Well of Loneliness by Radclyffe Hall and is set in Madrid before the Spanish Civil War.

Elena Fortún was the penname of Encarnación Aragoneses, who lived from 1886 to 1952, and she used a different alias, Rosa María Castaños, for this Sapphic autobiographical novel. She was married to a writer who is considered to be less talented, and he envied her literary success. Elena went to exile with him to Argentina in 1939. Despite being away from her beloved Spain and despite Francoism, she continued publishing the Celia series and the couple managed to make a living abroad. She never left her husband but when she returned to Spain in 1948 to see if it was possible for them both to come back, he committed suicide, leaving her and their only son, exiled in New York, shocked and estranged from each other

At the time of her death, one manuscript of Hidden Path was in Orange, New Jersey. Another one was in Buenos Aires. Both were brought back to Spain in the late 1980s by Marisol Dorao, a lecturer from Cádiz University who felt unable to approach Fortún’s lesbianism. The novel was found again by Professor Capdevila-Arguelles, and published in Spain in 2016.

Oculto sendero was El Pais book of the year, reinstating Fortún in Spanish cultural life. It was probably finished between 1940 and 1945 and started in the mid-1930s. It describes ideas about sexual inversion, gender unorthodoxy, androgyny and more generally not wanting to be and not being a woman in the most traditional sense of the word.

The work of feminist writers and artists including Elena Fortún was erased from public memory by the Spanish Civil War and the decades of dictatorship that followed. Professor Capdevila-Argüelles has been working to resurrect this lost feminist cultural heritage both in Spain and internationally. This has included documentary and feature films, multimedia projects and plays, plaques on buildings and feminist walks. Some of the materials are now part of the Spanish school curriculum.

Elena Fortún continued publishing the Celia books while in exile in Argentina after the Civil War. Professor Capdevila-Arguelles became a fan of the books when she was nine, when Spain was transitioning to democracy. Her generation didn’t study the civil war at school, or the Second Republic, and the Celia books were the only source of information for many children about a long-lost world not familiar to them.

Professor Capdevila-Argüelles has been responsible for the publication of new critical editions of Celia books written by Elena while she was in Argentina and a volume of her unpublished works and letters.

Professor Capdevila-Arguelles has also edited and published two volumes of Elena Fortún’s letters, covering the last four years of her life when she returned to Spain after the death of her husband and couldn’t be with Inés Field, the love of her life.

Professor Capdevila-Arguelles said: “Elena wrote this book but didn’t dare publish it, or even take it to an editor because of the content. Reading it shows us how she was discovering more about herself. She said born ahead of her time and she didn’t know how true that was.

“The style is a very fresh, it has agile dialogue and entertaining humour. It is uplifting and powerful, intense and honest. It is a novel of growing up and learning about sexuality, of someone reflecting on gender and how you present yourself to the world.”

The translation, published on March 18, is sponsored by Spanish Ministry of Education.