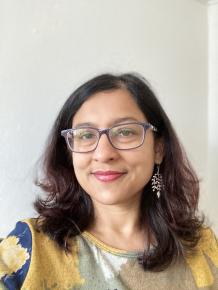 I am a historian of South Asia. I work on law and cultural exchanges in the British and Mughal empires - with particular attention to religion and family. My first book was on the shaping on the minority religious community of Indian Christians, through legal, political, racial and theological contests over the nineteenth and twentieth centuries. My second book is a rare micro-history of a landed lineage and their negotiation of the  laws of the Mughal empire.

I have a long-standing interest in Digital Humanities, and in making historical research materials widely available. When studying the Judicial Committee of the Privy Council, erstwhile final court of appeal of the British empire, I created an online catalogue of historic Privy Council papers in collaboration with Dr Charlotte Smith of Reading University, and the Digital Humanities lab at the University of Exeter.

I have taken these interestes further back in time, into the early modern Islamic and Persian-writing world. I am currently directing an international and collaborative five-year ERC-funded project on Persian and bi-lingual legal documents from India, Iran and the northern Indian Ocean. The project is called Forms of Law in the early modern Persianate World, 17th-19th centuries. As part of this project, my colleagues and I have created a free online repository of legal documents from India and the Indian Ocean, written in Persian and various Indian languages. This is an innovative digital humanities project that I hope will produce a useful teaching and research tool, besides acknowledging and encouraging the work of family historians in South Asia. Check out the Lawforms website here.

I am director of the Exeter Centre for South Asia and in the year 2020-21, I worked as joint chair of the History Decolonising Working Group at Exeter. Here are some blog posts in relation to our ongoing work and conversations.

I am currently working on a ERC Starting Grant-funded project called "Forms of Law in the Early Moderm Persianate World, 17th-19th centuries."

This is project about the writing of legal documents in the Persian language, which was common practice in a geographically vast and ethnically diverse cultural zone stretching from present-day Bangladesh up Yemen and east Africa. In many cases, Persian was combined with local vernaculars, and as such, this project is both the study of law in practice as well as multi-lingualism in operation.

Full details may be found on the project web-pages. I welcome communication from individuals with associated interests.

I have worked with the Philipps-Universität Marburg, Germany and the University of Virginia in connection with the ERC-funded project, Forms of Law in the Early Modern Persianate World, 17th-19th centuries, of which I am the PI. Prof Christoph Werner, University of Bamberg and Dr Fahad Bishara of the Department of History, University of Virginia were core members of the project team.
Professor Chander Shekhar, Department of Persian, Delhi University, is senior advisor of the Forms of Law project.
I am currently co-editing, with Prof. Crispin Bates, an exciting multi-volume book project with Bloomsbury Academic, on the Cultural History of South Asia.

I am open to discussing research proposals on any relevant subject within my research expertise. I am especially happy to consider working with candidates with interests in Mughal history, Indo-Islamic history more broadly, and the history of British colonial rule in South Asia. I particularly welcome candidates from the countries of South Asia to get in touch with me.

Prashant, "Gender and Law in the eighteenth-century Maratha Empire."

Sonia Wigh, "The Body of Words: A Social History of Sex and the Body in Medieval India." First supervisor: Prof. Sarah Toulalan

Daniel Phillips, "The Proximity of Purpose in Colonial Zoological Gardens: An Entangled History of Empire and the Establishment of the Calcutta Zoological Gardens, 1867-1908' First supervisor: Dr Gajendra Singh

In 2013-14, I led a panel of scholars for curating a temporary public exhibition on empire, law and the Judicial Committee of the Privy Council, for the UK Supreme Court. The exhibition was hosted in the UK Supreme Court July-September 2014, and was visited by approximately 26,000 people. The exhibition was associated with a number of lectures and other public-oriented actvities. See: A Court at the Crossroads of Empire.

I studied in universities in India, The Netherlands and the UK. I took my first degree in History from Jadavpur University, Kolkata, India; then I studied in what I still consider to be the best university in the world: Jawaharlal Nehru University, New Delhi. My PhD in history was from Cambridge, with a brief interlude at the University of Amsterdam, where I tried to become an anthropologist, and failed.