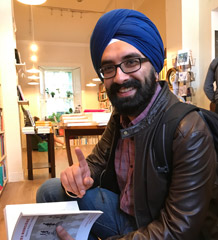 Fellow of the Royal Historical Society

Fellow of the Royal Asiatic Society