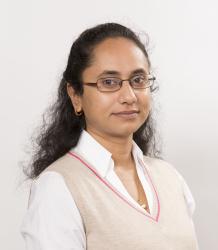 My research interests lie in the field of early modern literature and cultural history, particularly, the literature and history of famine and dearth. My first book Penury into Plenty: Dearth and the Making of Knowledge in Early Modern England was published by Routledge in 2015. My next book is an edited volume A Cultural History of Famine: Food Security and the Environment in India and Britain, published in the Routledge Environmental Humanities series in 2019. I am currently working on a monograph provisionally titled Placing Famine: Cultural and Medical Geographies of Dearth in India and Britain, 1550-1700. Both the edited book and the current book in progress are based on my recently completed AHRC project Famine and Dearth in India and Britain, 1550-1800, which produced a web-database in collaboration with colleagues from Jadavpur University and Aligarh Muslim University in India, and the Exeter Digital Humanities team. At present, I lead the Impact Follow-on project Famine Tales from India and Britain, also funded by the AHRC.

I teach early modern literature across the English undergraduate and post-graduate curricula. I currently convene the second-year core module Desire and Power: English Literature 1570-1640, the third-year module Food and Literature in Early Modern England, and the MA module Renaissance Space.

My research interests lie in the fields of early modern literature and cultural history.

My first book Penury into Plenty: Dearth and the Making of Knowledge in Early Modern England, published by Routledge (2015), is an interdisciplinary study of famine and dearth in England at the turn of the sixteenth century. It argues that dearth in this period gave crucial stimulus to knowledge-making and the formation of an experimental program of resource management, which I have termed ‘dearth science’. It explores intersections between the histories of early modern science, medicine, economics and literature, but with special attention to the rarely studied manuscripts and published works of the Elizabethan scientist, medical practitioner, socio-economic analyst, trader and poet Sir Hugh Platt (1552-1608) who tried to ‘remedy’ famine. I am particularly interested in the relationship between literary writing, socio-economic crises, and the production and circulation of knowledge in the early modern period. My aim is to apply the conceptual framework for a cultural history of dearth and its sustainable remedies that emerges from this project to other contexts, timeframes, and economies.

In 2010-11, I was Principal Investigator for the research network titled Early Modern Discourses of Environmental Change and Sustainability. Funded by the AHRC under the Landscape and Environment programme, and supported by English Heritage and the Peninsula Partnership for the Rural Environment (PPRE), the network brought together scholars from across the humanities and social sciences to consider the expression, negotiation and transformation of notions of environment and sustainability over time and place.

My current research continues the effort to study cultural and literary contexts of famines. I was the Principal Investigator for the recently completed project, funded by the AHRC (2014-16), titled "Famine and Dearth in India and Britain, 1550-1800: Connected Cultural Histories of Food Security". I use multilingual sources held in 15 archives across Britain, Bangladesh, and India, and aim to develop a cross-culturally informed hermeneutic capable of identifying and analyzing complex intersections between a wide range of texts and records on famines. This research has enabled Exeter and Jadavpur to build a digital resource, containing the literature, rare archival materials, and data on pre-industrial famines, for the benefit of humanities and social science scholars studying the subject. It has led to the edited volume of essays A Cultural History of Famine: Food Security and the Environment in India and Britain, Routledge Environmental Humanities series (London and New York: Routledge, 2019), and is the basis of my current book project, with the working title Placing Famine: Cultural and Medical Geographies of Dearth in India and Britain, 1550-1700. I am also the Principal Investigator for the ongoing Impact Follow-on project "Famine Tales from India and Britain," funded by the AHRC. "Famine Tales" engages a community of traditional scroll painters in Bengal and graphic artists from Calcutta to interpret and represent stories of early modern famines and their current relevance. The project distills many years of research on famines and communicates these findings to a wider public.

This research has stimulated my interest in a wide range of early modern writing, whether canonical or not: I am especially keen on Shakespeare and Renaissance drama, religious poetry and prose, receipt books and casebooks, manuscript culture, early printed books, vagrancy literature, travel writing, women’s writing, and radical writing, and of course on my preferred protagonist Hugh Platt. My new work on Mughal Indian literature and culture, and their relationship with Britain, will inform my next book. These seemingly eclectic research interests are bound by an approach to interdisciplinarity which consistently combines historical and literary modes of analysis, and by a general enthusiasm for cultural history.

I have completed the AHRC-funded project Famine and Dearth in India and Britain, 1550-1800: Connected Cultural Histories of Food Security (2014-16). I was the Principal Investigator for this project, and my collaborators were: Professor Amlan Das Gupta (Co-Investigator, Department of English and School of Cultural Texts and Records, Jadavpur University), Professor Azarmi Dukht Safavi and her team at the Institute of Persian Research, Aligarh Muslim University, and the University of Exeter's Digital Humanities Team, led by Gary Stringer. Among other outcomes, the project created the Famine and Dearth database, containing searchable transcriptions of over 700 multilingual primary sources relating to situations of famine and dearth in early modern India and Britain.

I am currently the Principal Investigator for the AHRC-funded Impact Follow-on project Famine Tales from India and Britain. This continues the collaboration with Jadavpur University and brings on board a new project partner, the British Library.

I am open to discussing research proposals on any subject relevant to my research expertise. I would be especially happy to consider working with candidates who have interests in early modern literature and cultural history, Eurasian/Anglo-Indian cultural exchanges, the global Renaissance, literature and science, literature and ecology, manuscript culture and book history. Projects taking interdisciplinary approaches to literature within and/or beyond the established literary canon would be very welcome.

Katherine Mudge (PhD), "The Face of Terra - Foreign soils and discourses of Nationhood in the Renaissance" (2020-present)

I studied at the Calcutta International School in West Bengal, India, until 1992. I then went to Presidency College, University of Calcutta, graduating BA with Honours in English in 1995, and to Jadavpur University, Calcutta, where I completed an MA in English, First Class, in 1997. I worked as a teacher of A-level English at the Calcutta International School until 2001, when I was awarded a Felix Scholarship which allowed me to take up my place at St Hugh's College, University of Oxford. I took an M.Phil. in English Literature 1500-1660, with Distinction, in 2003. The award of the Prince of Wales Research Scholarship from Trinity College, University of Cambridge, then enabled me to study for my Ph.D. ("Food and Dearth in Early Modern England: The Writings of Hugh Platt") which was awarded in 2007. I held temporary lectureship and teaching fellowship posts in the English Departments at the University of Exeter, Streatham Campus (2007-08), the University of Leicester (2008-09), and the University of Bristol (2009). I was appointed to a permanent lectureship in Renaissance Literature and Culture in the English Department, University of Exeter, in 2009, became a Senior Lecturer in 2014, and Associate Professor of Early Modern Literature and Culture in 2019. I was previously at the Cornwall Campus (2009-2016) and am now based at the Streatham Campus (2016 onwards).