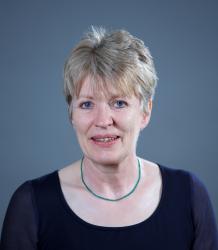 My research engages with the court culture of the Holy Roman Empire in the early modern period, particularly German-speaking, Protestant courts. The rich diversity of material has prompted different approaches and perspectives with my interests ranging from the stylization of those positioned at the apex of the court hierarchy, the ruling prince and his family (The Ideal Image: Studies in Writing for the German Court 1616-1706), to festive culture and its relationship to confessional identity. I have worked on the Singspiel and opera, court ballet and tournaments, occasional poetry and Festbeschreibungen, triumphal processions and emblematics.

I have been awarded a Senior Fellowship by the Herzog August Bibliothek, Wolfenbüttel, Germany’s major research library for the early modern period, to support my present research into ‘Hohenzollern Consorts: Dynastic Women and the Rise of Brandenburg-Prussia 1613-1713’. This project focuses on the duties and depiction of the electresses of Brandenburg, later queens in Prussia, in a century that began in confessional confusion and the chaos of the Thirty Years’ War and ended with the establishment of the Hohenzollern monarchy in Prussia.

Research into court culture crosses disciplines and nationalities, as reflected in a major collaboration with Professor Mara R. Wade (University of Illinois at Urbana-Champaign). Our co-edited volume The Palatine Wedding of 1613: Protestant Alliance and Court Festival explores the web of confessional interest and cultural exchange triggered by the marriage between Elizabeth Stuart, daughter of James V/I and Anna of Denmark, and Elector Palatine Friedrich V.

Much of my teaching is embedded in this research context. I am offering a new Level 2 module, ‘Reformation and Rupture, the Sinner and the Saved’, to introduce students to the impact of the Reformation on the Empire and to early modern culture and art. My contribution to a final-year module on German propaganda focuses on the work of the Saxon court painter Cranach the Elder and his support for Luther as well as the variety of textual and visual images projecting the power of the Hohenzollerns.

I welcome enquiries about postgraduate supervision (for MRes, MPhil and PhD degrees) in the fields of German literature and culture of the early modern period, sixteenth and seventeenth-century German court culture, including court ballet and musical theatre, the triumphal procession, the representation of dynastic women and the creation of confessional identity.

My interest in German court culture stems from the study of court festivities in all their diversity, including equestrian entertainments and triumphal entries and processions, firework displays and masquerades, grandiose operas performed by professional singers, and ballets danced by the ruler and his family. The various functions of the court festivity, be it as a demonstration of power and magnificence, a vehicle of state propaganda or a means of uniting allies or related dynasties, remain a focus of my research.

The emergence of opera in Italy and the ballet de cour in France was regarded with great interest at many German courts, which sought to introduce these art forms. My research has focused on the adaptation of opera and the development of the German Singspiel as well as the cultivation of German court ballet. My contribution to Spectaculum Europaeum provides a survey of the widespread popularity of this form of court entertainment (‘Ballet in the Empire', in Spectaculum Europaeum: Theatre and Spectacle in Europe, Histoire du Spectacle en Europe (1580-1750), ed. by Pierre Béhar and Helen Watanabe-O'Kelly (Wiesbaden: Harrassowitz, 1999), pp. 547-570).  This interest in dance partly informs my participation in the Europa Triumphans project;  my particular focus is on Protestant ballets performed in the period preceding the Thirty Years' War, some of the earliest ballets performed in the Empire (for details see Publications).

The Image of the Early Modern Prince

The figure of the prince dominates occasional writing at court. Festival reports, the wealth of poetry written to mark significant dynastic events, opera and ballet libretti, all present an idealized image of the ruler as an incorporation of traditional virtues. In The Ideal Image: Studies in Writing for the German Court 1616-1706 (Berlin: Weidler, 2005), I study the work of five writers active at different Protestant courts in the Empire and assess how the image of princes and the virtues associated with them are modified by a variety of factors, chief among them the political and religious circumstances of the time.

The Presentation of Women at Court in the Early Modern Period

I have become increasingly fascinated by the presentation of female members of ruling dynasties and the similarities - and significant contrasts - in their idealized depiction. The particular points of focus of my research include the portrayal of dynastic women as consorts, wives, mothers and widows, as well as the traditional (and non-traditional) spheres of influence in which they were shown to operate. At present I am working on a study of the electresses of Brandenburg, later queens in Prussia, between 1613 and 1713.

In this period the ambitions of the Hohenzollern electors of Brandenburg culminated in their elevation to kings in Prussia in 1701. The ascent of the Hohenzollerns went hand in hand with the architectural expansion of Berlin into a royal capital, a massive investment in the cultivation of the arts and learning, and the celebration of Brandenburg military power on which the elevation was based.

These developments are the subject of The Cultivation of Monarchy and the Rise of Berlin: Brandenburg-Prussia 1701 (Aldershot: Ashgate, 2010), a co-authored monograph with the historian Professor Karin Friedrich (Aberdeen).  This contains texts from the period (both in the original German and English translation) as well as accompanying essays, explaining their significance and the historical and cultural context in which they were written.

The Hohenzollerns developed the triumphal procession as a vehicle of dynastic propaganda. I am interested in the iconography and emblematics of the triumphal entries into Berlin that began with the military successes of Friedrich Wilhelm, the Great Elector (1620-1688) and reached their climax in the entry of his son Friedrich III (1657-1713) as Friedrich I, King in Prussia, in summer 1701.

The Palatine Wedding of 1613

The wedding of Elizabeth Stuart and Elector Palatine Friedrich V was an event of immense diplomatic, confessional and cultural significance. Professor Mara R. Wade (Illinois at Urbana-Champaign) and I have produced a co-edited volume which assembles the work of a team of international contributors. The Palatine Wedding  of 1613: Protestant Alliance and Court Festival (Wiesbaden: Harrossowitz, 2013) is the first interdisciplinary treatment of the event, which is placed within a network of cultural connections, linking Scotland, Denmark, England, the Netherlands, France and the Empire.