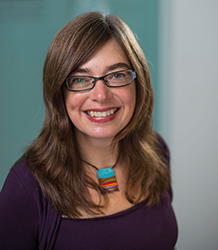 Michelle Bolduc, Professor in Translation Studies at Exeter, is an internationally recognized scholar of Translation Studies and Comparative Medieval Literature (French, Occitan, and Italian), and has published extensively on medieval literature (translatio) as well as on modern rhetoric--the New Rhetoric Project--and its translation. Under the direction of Barbara K. Altmann and F. Regina Psaki, she took a PhD in Comparative Literature with a specialization in Medieval Literatures from the University of Oregon; she has held positions at the University of Wisconsin-Milwaukee and the University of Arizona.

Author of Translation and the Rediscovery of Rhetoric (2020) and The Medieval Poetics of Contraries (2006), she has published extensively on medieval literature and rhetoric.

She has also published on modern rhetoric – the New Rhetoric Project – and its translation, and is at the forefront of bringing the work of Chaïm Perelman’s and Lucie Olbrechts-Tyteca’s New Rhetoric Project into English. For this work she was awarded in 2014 a two-year National Endowment of the Humanities Scholarly Editions and Translations Award ($116,000), a prestigious grant funded by the United States federal government.

From September 2020, she is a co-investigator of the GW4 Building Communities Initiator Grant on "Rhetoric in Society".

She has received University-level Certification [qualification] in Comparative Literature from France’s Ministère de l’Education nationale [French National Education Ministry]. Among other professional service, Michelle has served as an Executive Committee Member of the Occitan Discussion Group of the Modern Language Association (2011-2015), and as its President (2014), as well as Secretary-Treasurer of the Société Guilhem IX (2007-2009).

She is the author of two books, and has published extensively on medieval literature and rhetoric, as well as on modern rhetoric – the New Rhetoric Project – and its translation.

Her most recent book, Translation and the Rediscovery of Rhetoric (Toronto: Pontifical Institute of Mediaeval Studies, 2020), shows how translation, as practice and as metaphor, serves as the vehicle for the transfer of rhetoric as an art of argumentation and persuasion from Classical Greece and Rome to modern Paris and Brussels by way of medieval France/Italy.

It explores a significant and quite specific transmission of rhetorical thought. Beginning with the Roman orator Cicero, it proceeds to the medieval Italian notary, philosopher, and statesman Brunetto Latini, whose translations of Cicero’s De inventione will plant the seeds for the renewal of rhetoric as an art of persuasion, radically changing the fate of rhetoric in the twentieth century in the work of the French literary critic Jean Paulhan and Belgian philosophers Chaïm Perelman and Lucie Olbrechts-Tyteca.

As Helen Solterer (Duke University) comments, “Bolduc investigates this sequence as a way to think through the fundamental operation of translation, as much a political activity in Europe savaged by world war as in Republican Rome or medieval city-states. The result is an uncommon reflection on the civic value of artful language and the transmission of knowledge that is one birthright of every humanist.”

The wildly succesful Translation! festival, which she has co-organised with her colleague, Dr. Eliana Maestri, is Michelle's brainchild. The Translation! festival is a celebration of languages and cultures across various sites in Exeter city centre (RAMM, the Phoenix, Exeter Central Library) that takes place biennially in late September, in tangent with the European Day of Languages (26 September) and International Translation Day (30 September). The day-long festival features a range of thought-provoking, exciting and interactive events celebrate the uniqueness of languages and cultures, featuring the innovative ways in which communication can take between languages and cultures, and even beyond the written word.

The Translation! festival engages translation practioners, authors and poets, performance and visual artists, and scholars reknowned locally and globally for their reflections on tranlsation. Attendees have included not only the regular users of the sites, but also A-level and International Baccalaureate students; GSCE and sixth form students from local secondary schools; the local community of translators and interpreters, contacted through the local branch of the ITI (Institute of Translators), and of course, members of the general public.

Translation! has the following overarching aims:

·       To encourage people to recognise and cherish the rich linguistic and cultural diversity found in the UK and more locally in the city of Exeter.

·       To incorporate international members of the local community in the day as both participants and attendees, and thus encourage a sense of inclusion and appreciation of different cultures.

·       To broaden the general public’s perception and understanding of translation, raising awareness of the wide variety of forms translation can take.

The Translation! festival has been supported generously by the College of Humanities and the British Academy (Maestri award).

She has taught a wide-ranging number of courses in Translation Studies as well as in French and Comparative Literature, including MA-level translation theory and applied French to English translation (specialized and literary), both of which she developed for online course delivery. She has also taught graduate seminars thematically related to the topos of translatio. Having taught at both undergraduate and graduate levels, she offers teaching expertise in several additional areas: comparative medieval literature, and European (especially French) intellectual culture—literature, philosophy, and the arts—of both the Middle Ages/Renaissance and the early twentieth century.

Michelle has been recognized for her innovative teaching, having been awarded a fellowship in the University of Wisconsin system-wide Teaching Fellowship Program and invited to the Wakonse Conference on College Teaching sponsored by the Arizona Board of Regents. Since 2012 she has also participated in a French pedagogical project (‘Voix d’Aujourd’hui’), bringing poetry and translation into high schools in Brittany, France, and thus having impact on a non-academic audience.