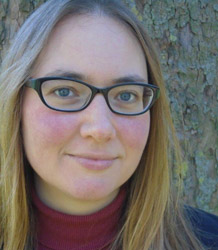 I am an historian of British cultural and intellectual history and historical culture from about 1600. I am interested in how people understood and related to the past through scholarship, antiquarianism, drama, poetry, art, and architecture. This was the focus of my first book, Queen Boudica and Historical Culture in Britain: An Image of Truth, which was published by the Past and Present book series and Oxford University Press in summer 2018.

In my work, I draw on a variety of source material, including biblical, classical, antiquarian and literary works, as well as theatre, song, imagery, and sculpture. I have recently become interested in philosophy and intellectual history, and in the development of the discipline of the history of ideas in Britain and America and am using these frameworks to reconsider approaches to intellectual history, particularly in the nineteenth century.

I am in the process of putting together a project provisionally titled "Knowing culture: the history of ideas, cultures of knowledge, and networks of practice in Britain, c. 1800-1950". The project investigates the way in which intellectual history can be told demotically, through non-canonical texts and ideas and, more significantly, through the history of social networks of ordinary individuals.

I am co-investigator on the AHRC-funded "Voyaging through history: the Mayflower in Britain, 1620-2020". You can view the project website at: http://voyagingthroughhistory.exeter.ac.uk/

I am an historian of ideas and culture in Britain, working across periods which are too often seen in isolation from one another, in particular the early modern and the modern, but also with an eye toward the more distant past. My interest has been specifically in the field of historical culture, or the reception of the past in Britain, ranging from the history of popular history and antiquarianism to the more established field of the history of historiography. I am particularly interested in the historical antecedents of modern ideas; this necessitates taking this longue-durée approach, as well as working across traditional disciplinary boundaries, and acknowledging the interconnectedness of the wide variety of genres, media, and methods that constitute our ideas about the past.

I am currently putting together a project provisionally titled "Knowing culture: the history of ideas, cultures of knowledge, and networks of practice in Britain, c. 1800-1950". The project investigates the way in which intellectual history can be told demotically, through non-canonical texts and ideas and, more significantly, through the history of social networks of ordinary individuals. Inspired by the not-terribly-fashionable thought of A.O. Lovejoy, R.G. Collingwood, and others, the project will blend conventional archival work with digital humanities techniques to create an alternative intellectual history.

However, even as my interests broaden to include other histories of knowledge, I maintain my earlier attachment to the history of history, not least through my work as Co-I on the AHRC-funded project "Voyaging through history: meanings of the Mayflower in Britain, 1620-2020". I am particularly interested in how twentieth-century historical discourse related to the emergence of myth and folklore studies.

I am Co-I on the AHRC-funded "Voyaging through History: the meanings of the Mayflower in Britain, 1620-2020", with Dr Tom Hulme (Queens University Belfast), and a Research Associate, Dr Ed Downey. We are working with our Project Partners, the British Library and the Mayflower Theatre in Southampton, to explore the multi-faceted afterlife of the famous voyage as it was understood in Britain. The project will run from June 2018 until June 2021. Our project website is: http://voyagingthroughhistory.exeter.ac.uk/

I am interested in supervising research projects that engage with the history of historiography and historical culture, as well as memory, commemoration, and the reception of the past. However, I would be very open to discussing proposals from students interested in the history of ideas in Britain more broadly, especially regarding intellectual and cultural discourses of knowledge, disciplines, religion, and gender.

Along with the Project Team, I am working with the British Library and the Mayflower Theatre in Southampton to explore the meanings of the Mayflower voyage in the past, as well as in contemporary culture.

I was elected a Fellow of the Royal Historical Society in July 2018.

I have been employed as a researcher on a variety of projects outside of academia, including the major film project The People Speak (History Channel, 2009), and Churchill's Other Lives for BBC Radio 4. I have also been employed as a private researcher by members of Samuel Johnson's Literary Club, which has just celebrated its 250th anniversary with the publication of The New Annals of the Club (Modern Art Press, 2014).

I have written articles for The Conversation and History Today.

I teach first-, second-, and third-year undergraduates, as well as supervise PhD students. My favourite module to teach, aside from my third-year special subject module 'Pasts and Presents' is probably History Foundation. However, I also enjoy supervising independent projects at second and third year. I have been previously nominated for an award for Best Lecturer, and one of my proudest moments was receiving a round of applause from a first-year audience. And that after a lecture on Hegel!

I received my first degree en absentia from the State University of New York while studying abroad at Oxford of all places. I went on to complete an MA in Modern History at King's College London and, to the astonishment of my high school history teachers who rarely saw me outside of detention, went on to complete my PhD in 2013, also at KCL, under the supervision of Professor Ludmilla Jordanova. Following appointments as a research assistant at the University of York and on various media projects with the BBC and others, I was appointed to Lecturer at the University of Exeter in 2015. I divide my time between Cornwall and London.