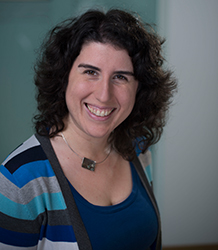 Rachel is an Honorary Research Fellow at the University of Exeter, and worked on an interdisciplinary ESRC project using data analysis, databases, and OCR software. Post-Exeter she moved to work at King's College London on the European Holocaust Research Infrastructure (EHRI). She completed her BA, MA, and PhD at Royal Holloway, University of London under the supervision of the late Professor David Cesarani OBE. Whilst studying for her doctorate she lectured in History at Royal Holloway, winning the College Postgraduate Teaching Prize in 2016 for her innovative teaching methods. She also held a lectureship at Kingston University in Business Information Systems and Quantitative Methods.

For more information about Rachel's work, visit her website.

Rachel has spoken and published widely on immigration history and Second World internment in the UK and the USA. She is particularly interested in experiences and memory of internment. Rachel is currently researching the memory and memorialisation of internment camps, refugee trajectories, and the use of currency in internment camps with particular reference to money created by the Dunera Boys in Australia.

Rachel has appeared on the BBC and Sky News and been interviewed for various television documentaries. She has written several articles for The Conversation that have been reprinted both in the UK and the USA, most notably in Newsweek and The Independent. Rachel also blogs for The Huffington Post.

In 2018, Rachel was commissioned to write an article for The Warth Mills Project, funded by the Heritage Lottery Fund, and was a media contact for the Dorothea Lange photographic exhibition at the Barbican Centre, London. She is also involved in Holocaust Memorial Day events in Exeter.

I appeared on BBC1 show ‘Heir Hunters’ in 2014, where I discussed the likely circumstances surrounding a soldier captured in Hong Kong and held in a Japanese POW camp during the Second World War.

In December 2016, I appeared on Sky News discussing the signficance of Shinzo Abe's visit to Pearl Harbor. Articles discussing the significance of Abe's visit and the links to Japanese American internment and the possible creation of a Muslim registry during Trump's presidency can be found here in The Independent, Newsweek and The Conversation. I discuss the effect of US Executive Orders on children here. I have also published in The Independent and The Conversation about child refugees in the British media.

I blog for The Huffington Post. Check for my latest posts here.

I completed my BA (2006), MA (2009) and studied part-time for my doctorate (2009-2016) at Royal Holloway, University of London, under the supervision of Professor David Cesarani OBE. I was the recipient of two grants from the Friendly Hand Charitable Trust in 2010 and 2011, which enabled me to visit archives and sites of former internment camps in the United States of America and on the Isle of Man.

From 2014 to 2016 I taught Modern British, Modern American, and British Economic history to undergraduates at Royal Holloway. I was also a Lecturer in Informatics at Kingston University from 2011 to 2016.

Internment during the Second World War: A Comparative Study of Great Britain and the USA (London: Bloomsbury, 2017)

Review of Inside America’s Concentration Camps: Two Centuries of Internment and Torture, (review no. 1078), Reviews in History (Apr., 2011)

‘History and the Environment’ in Bringing the Outside In: Enriching Student Learning in the Humanities through Environmental Engagement, (The Higher Education Academy, 2010), pp. 31-2.

Review of A Tragedy of Democracy: Japanese Confinement in North America, (review no. 983), Reviews in History (Oct., 2010)