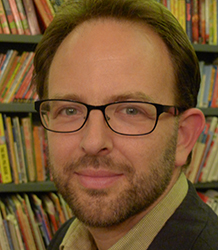 My research addresses the social and cultural history of state socialism in central-eastern Europe, the  politics of memory in the area during both socialism and post-socialism, and aims to connect the region to broader global histories and processes through transnational and comparative methods.

A monograph, 1989. A Global History of Eastern Europe, written with my colleagues Bogdan Iacob, Tobias Rupprecht and Ljubica Spaskovska to co-incide with the thirtieth anniversary of the 1989 revolutions, was published by Cambridge University Press in September 2019. There are reviews here and here

I have recently been a Principal Investigator on three research projects. The first is a Leverhulme Research Leadership Award (2014 – 2019): '1989 after 1989: Rethinking the Fall of State Socialism in Global Perspective'. This has brought a team of four research fellows, and two PhD students, to Exeter. Together we have undertaken a range of projects which aim to place the end of state socialism in both longer-term and global contexts, connecting this major historical transformation to broader political, economic and cultural processes of the late 20th and early 21st centuries.

The second is an Arts and Humanities Research Council (UK) funded project, in collaboration with six other institutions and ten colleagues:  'Socialism Goes Global: Cold War Connections Between the 'Second' and 'Third Worlds'' (2015-20). This explores the political, economic and cultural encounter between eastern Europe and the decolonising world from 1945. See our 'Tito in Africa' exhibition: https://www.muzej-jugoslavije.org/en/exhibition/tito-u-africi-slike-solidarnosti/ . For an interview in Romanian on the project.

The third is an AHRC-Labex funded Franco-British project, Criminalization of Dictatorial Pasts in Europe and Latin America in Global Perspective (2016-2020). This project analyses the criminalisation of dictatorial pasts in Europe and Latin America since 1945. It considers how justice and historical narratives are produced across multiple professions, networks and spaces; and way they ideas and practices of dealing with the past have traveled across and between regions, and on a global scale. In 2020, we published an open-access collection on the global crisis in liberal memory, and how it has been challenged by populist and decolonial approaches to remembering the past.

I am currently an elected Senator representing the College of Humanities (2018-2022).

My office hours are Monday 11-12 and Wednesday 10.30-11.30. Please either join me through Microsoft Teams - which will be open during these times - or email me to arrange a specific time.

I am currently working on a number of books:

1. (with Péter Apor) on  the impact of the politics of decolonisation, peaceful co-existence, anti-imperialism, and market socialism on official and unofficial activist culture in late socialist Hungary.

4. (with Paul Betts, eds.) on Socialism Goes Global: Encounters between the Eastern Bloc and Decolonising World.

Over the past decade, I have published on the way in which history gets recast at moments of major political change, addressing the ways in which political elites, cultural institutions, institutes of memory, and ordinary people have contributed to the re-imagining of the past after the fall of Communism in eastern Europe after 1989. This resulted in:  The Unfinished Revolution: Making Sense of the Communist Past in central-eastern Europe. It was shortlisted for the 2011 Longman History Today Book Prize, and chosen as one of the 'best books of 2011' by Foreign Affairs. It was discussed on BBC Radio 4, http://www.bbc.co.uk/iplayer/console/b011jv8c I have also co-authored a monograph titled 'Europe's 1968: Voices of Revolt': it is a work that incorporates the socialist east and Mediterranean dictatorships into a comparative and transnational account of the activisms of the1960s and 1970s

I am willing  to supervise work on the social, cultural and political history of modern central-eastern Europe. I am particularly keen to work with research students who are interested in the socio-cultural and memory studies approaches to the study of state socialism and post-socialism, and in connecting the region to broader global histories and processes through transnational and comparative methods. I can also offer particular expertise in the use of oral history and the source bases created by state socialism.


Anna Sheftel, studying the politics of memory and reconciliation in post-conflict Bosnia

I completed my BA in History, M.Phil. in Russian and East European Studies and a D.Phil. at the University of Oxford. I have worked in the History Department at Exeter since 2004.