Skip to main content
College of HumanitiesHistoryResearchEconomic and Social HistoryMultiple tasks undertaken by male workers in the Shuttleworths' accounts, Lancashire, 1582-1621 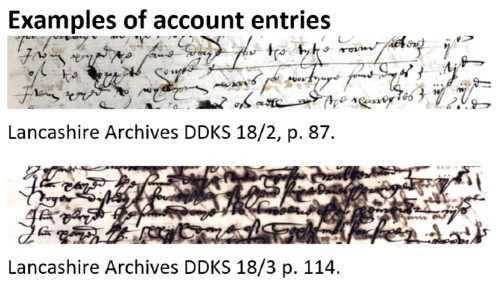 When the multiple tasks or diverse occupations of workers in sixteenth and seventeenth centuries have been discussed by historians such as Alan Everitt and Mark Overton, the traditional view has been that the main occupation of most inhabitants in rural England was farming, but that they also engaged in by-employment to support their families. This conclusion is mainly supported by evidence from probate inventories which show agriculture being combined with crafts and retailing in many households. This has been challenged by Sebastian Keibek and Leigh Shaw-Taylor who argue that by-employment is overrepresented in probate inventories. When turning to the household and farm accounts, economic historians, such as mostly recently Humphries and Weisdorf, have been more interested in selecting records of wages to construct long-term wage series. Managerial or financial responsibilities, and the specific occupational titles recorded in the accounts have been used to separate skilled from unskilled workers. However, the multiple tasks undertaken by wage workers have been ignored in this classification. Based on Shuttleworths’ accounts of 1582-1621, this blog discusses some findings related to multiple tasks undertaken by male workers. The Shuttleworths were a gentry family who lived at Smithills near Bolton, before moving to Gawthorpe Hall in Padiham parish (now a National Trust property), in 1600.

Before analysing the data, some explanations should be made here. Incomplete records made it impossible to create a complete record of tasks undertaken by workers over time. For example, when William Morres worked for the Shuttleworths from May 1586 to April 1589, seven entries provided detailed information about his tasks, including harrowing, working at turves and driving lambs to Haslingden [a small town in Rossendale, Lancashire]. However, the remaining seven entries detailed only the days worked and wages paid but not the tasks undertaken. In addition, general entries that did not name the workers employed mean we cannot know the maximum amount of work undertaken by particular labourers. And thus, this discussion concentrates on those labourers for whom detailed information is available, including names, tasks, days worked and payment. In terms of their tasks, three types of work are used here to make further classification, namely agricultural labourers, building labourers, and other day labourers. Among which, other day labour was mainly composed by ditching and hedging.

Oliver Stones was paid for slating roofs at Lostock with or without his man from 1583 to 1590. His family did not appear in the accounts until June 1592, when he and his children were paid for different tasks. After that, Oliver Stones, his son and his brother worked at Smithills undertaking diverse tasks between 1593 and 1598. Oliver Stones’ son was paid for getting moss, and he also worked with his father ‘driving out and filling the dung’, and mending ponds. Oliver Stones’ brother was paid 4d for one days’ shearing corn at Smithills, and Oliver Stones himself was paid for mending the stairs and ‘cleaning the slate’. He also worked as agricultural labourer and received payment for ‘getting’ hay. Oliver Stones and his family provide an example of a family who undertook multiple types of work for the Shuttleworths. This work fell into all three categories of agricultural work, building work and other work.

Richard Stones was an agricultural labourer who drove the plough at Hool for a payment of 4d a day. But later, he became a middle man and was in charge of providing meat such as wildfowl, chicken and fish to the Shuttleworths from September 1588 to August 1595. He provides an example of someone who appeared to change his specialism over time, perhaps after marriage.

Roger Cockshott was a worker who did diverse tasks during his employment from May 1600 to February 1600/01 including building work and agricultural work. The tasks he was paid for included shifting timber, fehing [dressing or cleaning] the ground of the new hall, serving the waller, working at hay, ditching at different places and so on. His wage rate ranged between 2d per day and 3d per day.

John Roe, a worker hired by the Shuttleworths from 1617 to 1620, was not only paid for spinning and weaving but also shearing corn and threshing. In fact, this was not the first time when this name John Roe appeared in the accounts. He was also recorded for mowing and carrying hay on 11 August 1604.

These examples show that some workers hired by the Shuttleworths did multiple types of tasks to earn money, including agricultural work, building work and other types of work. The more skills they acquired over time, the more tasks they could do to earn wages. And the diverse tasks undertaken by both them and their family members could contribute more to their family incomes. In addition, the evidence of day labourers and day labour from the Shuttleworths’ accounts shows a flexible pattern of work, which prompts us to reconsider the traditional view that the main occupation of workers in early modern England was farming. This opinion was based on the evidence from probate inventories, which are biased towards more wealthy households as Sebastian Keibek and Leigh Shaw-Taylor argue in their article. For those who did not leave inventories, there may also have the opportunity to do more than one type of work during their life-cycle.

Another related issue is the meaning of labour/work. Both farm accounts and inventories have long been used by historians to identify occupations of people in early modern England. But to what extent was this kind of identification important to labouring people themselves? Alexandra Shepard argues that the assumed connection between labour/work and the loss of autonomy might be an important reason for labouring men and women in the church courts to try to present their honesty and credit. Compared with occupational labels which may imply ‘dependence’, perhaps it was more important for workers to stress their ‘independent status’, although they might have to do diverse tasks to make a living.

In addition, what mattered the most to people living in late sixteenth and early seventeenth century Lancashire, a period of poor harvests and high mortality, were job opportunities. Multiple tasks undertaken by wage workers could definitely help them earn more money and overcome difficulties. Thus the most appropriate way of characterising their types of work is the concept ‘economy of makeshifts’, the multiple means of making ends meet discussed by historians of poverty.