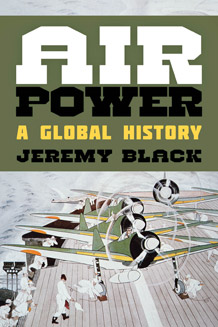 Air power has become the weapon of choice for Western politicians because it causes maximum destruction with the minimum of commitment, according to new research from a University of Exeter academic.

A new book by Professor Jeremy Black, one of the world’s foremost scholars of military history, covers the rise of military aviation and the use of airpower over land and sea over both World War One and Two. He shows how the use of air in warfare has increased the tempo of battles as well as their deadliness.

Today air warfare is highly precise but planes are used to target civilians in the Middle East and the use of drones on individuals raises moral questions. Professor Black discusses the implications of this rise in unmanned aircraft and how air power is now in crisis because other services are more effective at targeting the threats today from terrorists and insurgents.

Air Power: A Global History outlines the use of airpower over land and sea in both World War I and II. The book also covers other battles in the twentieth and twenty-first centuries and the emergence of air power in Latin America, Africa and Asia. It describes the debates about the pros and cons of strategic bombing and aircraft carriers versus battleships and describes managerial, doctrinal, and technological innovations.

Professor Black said: “Air power has often been seen as a strategic tool by governments, for example to prevent the spread of communism.

“Now it is becoming difficult for air forces in western countries to justify their costs with so many other competing agendas for governments, and other nations such as China, India and Russia are investing in air power.”

The history starts with hot air balloons, and then zeppelins, piston engine fighters, jet bombers, and finally the so-called Military Revolution of today.

Professor Black describes the deadly consequences of the close air support used by the RAF during the latter part of World War II. He also shows the limits of air power during the two Gulf Wars, the connection between air and naval power, including ground/logistics support, anti-aircraft measures, and political constraints.

Air Power: A Global History by Jeremy Black is published by Rowman & Littlefield and can be found here.