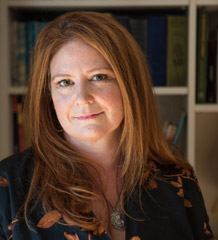 After twenty years teaching Classics in schools, I completed a PhD at King's College London on Abraham Cowley's 7000-line Latin poem Plantarum Libri Sex (1668), and came to Exeter in 2019 as a British Academy Postdoctoral Research Fellow, working on the anthologies of Latin verse produced by the universities of Oxford and Cambridge to mark major state occasions in the early modern period. Based in the English department, I teach on the Desire and Power and Renaissance and Revolution modules, where I have a particularly interest in exploring the range of interactions between early modern English texts and their classical predecessors.

Trained as a classicist, I now work on the Latin poetry of English poets, and am particularly interested in the ways in which classical themes and tropes are redeployed and reshaped in discussion of the English Civil War. I also work on the relationship between early modern and classical Latin in terms of themes of the natural world and of gender.

My current research project, funded by the British Academy, involves the first ever major study of the seventeenth-century neo-Latin verse anthologies produced by the universities of Oxford and Cambridge to mark major state occasions. I hope to bring these hitherto-untranslated and understudied works to the attention of a wider audience, showing that they have an important part to play in the formation of the discourse of monarchy and of revolution.

I may have stopped being a schoolteacher, but engagement with students is still very important to me. At Exeter I each and lecture on two Early Modern modules, Desire and Power (Term 1)  and Renaissance and Revolution (Term 2), where, as well as demonstrating the many and varied ways in which writers of the period engage with classical literature, I also talk a lot about trees.

Students in my seminar groups will enrich their understanding of the texts they read through developing a greater awareness of the social, literary and political contexts in which they operate. Most importantly, though, you will be encouraged to formulate your own response to the text, and to develop the confidence with which to assert an authentic and individual critical viewpoint.