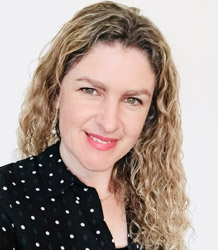 Dr Wendy O'Shea-Meddour is the Director of Creative Writing at Exeter University. Prior to joining the English Department in 2018, she taught English Literature and Critical Theory at Cardiff, Reading and Oxford University.

Since Dr O'Shea-Meddour's debut was shortlisted for the 'Branford Boase Award for Outstanding First Novel' (2012), she has gone on to publish twenty children's books, including Lubna and Pebble, which was named as one of the 'Best 10 Childen's Books of the Year' by TIME Magazine, and Tibble and Grandpa, a UKLA 'Outstanding Winner'.  Highlights of her writing career include appearances on Woman's Hour, CBeebies' Bedtime Story, CBBC's Newround and the Edinburgh Literary Festival. As well having the Children's Laureate describe her work as 'simply brilliant,' she wasalso the recipient of the Margaret Wise Brown Prize for Children's Literature in 2020.

A strong link between academic research and creative practice is a striking feature of Dr O'Shea-Meddour's writing, and current research projects on 'child wellbeing' and 'migration' in children's literature have resulted in both grants and internationally acclaimed creative writing publications. Award-winning titles include: Lubna and Pebble,Tibble and Grandpa,Tisha and the Blossom, A Hen in the Wardrobe, the Wendy Quill series, The Secret Railway series, How the Library (not the Prince) Saved Rapunzel and Dottie Blanket on the Hilltop.

Last year, she was awarded a Heritage and Creativity Fellowship enabling her to embark on an interdisciplinary research project examining the construction of 'Migrants, Aliens and the Other in Contemporary Children's Literature'. This was born out of her AHRC funded research on 'The Muslim Other in Contemporary British Fiction' and has led to a collabration with colleagues at Newcastle University and Seven Stories (the National Centre for Children's Books). Though in its early stages, this research has already inspired a forthcoming children's book with with Oxford University Press.

Dr O'Shea-Meddour has also been the recipient of the John C Laurence Award for 'Writing that Improves Relations Between the Races', and an Arts' Council Grant (2018) that supports her most recent project: 'Vulnerable Children and the Power of Picture Books'.

Dr O'Shea-Meddour also gives creative writing workshops and talks (for both children and adults) in primary schools and libraries across the UK, particularly focusing on venues in deprived areas.

Convenor of EASM133: 'Structures of Realism'

Fellow of the Higher Education Academy