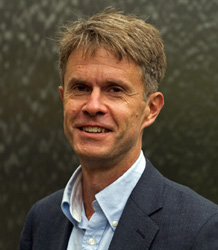 Andrew McRae is Professor of Renaissance Studies in the Department of English; and Dean of Postgraduate Research and the Exeter Doctoral College.

His publications include: God Speed the Plough: The Representation of Agrarian England, 1500-1660 (Cambridge, 1996); Literature, Satire and the Early Stuart State (Cambridge, 2004); Literature and Domestic Travel in Early Modern England (Cambridge, 2009); and (as co-editor) ‘Early Stuart Libels: an edition of poetry from manuscript sources'. He was the Principal Investigator for the AHRC-funded ‘Stuart Successions Project’ and 'The Poly-Olbion Project', and led the development of the Stuarts Online. In 2019 he has co-directed Places of Poetry, a community arts project for England and Wales.

Professor McRae is a Principal Fellow of the Higher Education Academy, a Strategic Reviewer for the Arts and Humanities Research Council, a fellow of the English Association, and a member of the REF 2021 English sub-panel. He maintains 'A Head of Department's Blog' and tweets @McRaeAndrew.

In my research, in the field of early modern English literature and culture, I aim to combine literary and historical modes of analysis. Particular themes and questions that I have addressed, and that continue to interest me, include: literature and the environment, literature and politics, satire, pastoral and georgic, travel-writing, space and nationhood, popular literature, the early modern body.

My current research projects include two major collaborative AHRC-funded projects: 'The Stuart Successions Project', which is concerned with the wealth of literature produced to mark the accession of each Stuart monarch across the period 1603-1702; and 'The Poly-Olbion Project', which aims to produce a new scholarly edition of Michael Drayton's early seventeenth-century poem of national description. I also maintain an interest in representations of early modern woodlands, in the context of Britain's earliest debates over the sustainability of a natural resource. I expect that this will lead to grants and publications in the future.

I have supervised doctoral projects on topics including: London lord mayors’ pageants of the early seventeenth-century; taverns in early modern literature; the maternal body in Shakespeare; the cultural history of cancer in early modern England; and the figure of the royal consort in Stuart England. I have particularly enjoyed supervising two projects in collaboration with a medical historian, and I am always keen to discuss potential projects with students, and to find the right supervision arrangements for the individual.

My research focuses on the literature and cultural history of the early modern period (c.1500-1700). One strand of work has focused on literature and the land, considering the ways in which writing of various kinds represents social, economic and environmental changes of the time. This has led to publications including God Speed the Plough: The Representation of Agrarian England, 1500-1660 (Cambridge, 1996) and Literature and Domestic Travel in Early Modern England (Cambridge, 2008). A second strand of work has focused on political literature, particularly in the context of the upheavals of the seventeenth century. This has led to publications including Literature, Satire and the Early Stuart State (Cambridge, 2004), and (with Alastair Bellany) the online edition Early Stuart Libels (2005).

My current research is centred on two major AHRC-funded projects. ‘The Stuart Successions Project’ (2012-15; PI, with Paulina Kewes, Oxford, as CI) considers the category of succession literature in the Stuart era (1603-1714). Outputs include a collection of essays (contracted to Oxford University Press), a database, and an anthology of primary materials (contracted to Manchester University Press. ‘The Poly-Olbion Project’ (2013-16; PI, with Philip Schwyzer, Exeter, as CI) aims to produce a new scholarly edition of a remarkable early seventeenth-century work of national description. Poly-Olbion is a 15,000-line poem by Michael Drayton, published with prose notes by John Selden and decorative country maps by William Hole. As well as the scholarly edition, the project will stage a conference and produce a volume of critical essays.

Both ongoing research projects involve strong elements of impact-oriented work. ‘The Poly-Olbion Project’ has a twin-project, ‘The Children’s Poly-Olbion’, co-funded by the AHRC and the Heritage Lottery Fund. Meanwhile, in the autumn of 2015 we will begin work on 'The Stuart Successions: fresh approaches to the understanding of seventeenth-century history and literature', funded by an AHRC follow-on grant.

In my time at Exeter I have been heavily involved in management roles at various levels. Positions have included: Associate Dean, Education, in the College of Humanities; Director of Education, in the School of Arts, Literatures and Languages; Director of Research, English. I have served on University Senior Management Group, Senate, and numerous university-level committees and task-and-finish groups. Most recently, in 2014-15, I chaired the Profesorial Pay Review Group.

At a national level, I am involved in both research and educational policy: as a member of the AHRC Advisory Board, a QAA institutional reviewer, and (since 2015) a Principal Fellow of the Higher Education Academy. I maintain ‘A Head of Department’s Blog’ and tweet @McRaeAndrew.