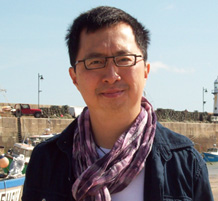 My principal area of research is transnational Chinese cinemas (including China, Taiwan, Hong Kong, Singapore, and the Chinese diaspora).  My publication in this area includes studies on key auteurs such as Chen Kaige, Tsai Ming-liang, Ang Lee, Wong Kar-wai and Royston Tan.
As the founding editor of the Journal of Chinese Cinemas, the first and only English-language, internationally peer-reviewed academic journal dedicated to the study of Chinese cinemas, I am committed to promoting an inclusive concept of transnational Chinese cinemas and a multiplicity of approaches to its study.

As co-editor of Remapping World Cinema: Identity, Culture and Politics in Film (Wallflower Press, 2006), I am among a group of scholars (including Dudley Andrew and Lúcia Nagib) leading the rethinking of world cinemas as a field. The introduction to the volume (co-authored with co-editor Stephanie Dennison) situates world cinemas as a theoretical problem and proposes to study world cinemas as discipline, methodology and perspective. I have further research interests in East Asian (Japanese, South Korean), South-east Asian (especially Thai), Iranian and European cinemas.

(3) Representations of Gender and Sexuality in Film

My book, Celluloid Comrades: Representations of Male Homosexuality in Contemporary Chinese Cinemas (Honolulu: University of Hawaii Press, 2006) is a unique contribution to the field of film studies as the first book-length study on the subject of queer sexuality in Chinese cinemas. It posits that representations of male homosexuality in Chinese cinemas have been polyphonic and multifarious, posing a challenge to monolithic and essentialised constructions of both "Chineseness" and "homosexuality". Examining the politics of representation in the age of multiculturalism through debates about the films, the book also calls for a rethinking of the limits and hegemony of gay liberationist discourse prevalent in current scholarship and film criticism.

In her endorsement on the book jacket, Rey Chow says: "Without question, Song Hwee Lim has presented us with an exemplar of quality scholarship in the study of contemporary Chinese cinemas." The book has been favourably reviewed since publication, including the following:

"[Celluloid Comrades'] extensive coverage and erudite exegesis guarantee that it will be a fundamental work for all scholars interested in Chinese cinema and sexuality for many years to come. . . . Thoughtful, rigorous, and challenging." -The China Quarterly (Chris Berry, June 2007)

"Undoubtably one of the most thoroughly researched and tightly argued books on Chinese cinemas. ... Its methodological rigor and the richness of its insights will significantly raise the bar for future studies on Chinese cinemas and sexualities." -Bulletin of the Institute of Chinese Literature and Philosophy (Tze-lan D. Sang, September 2007)

I am interested in the travel of queer theory and queer studies to Taiwan, and focus particularly on the translation of the term ‘queer' into ‘ku'er' in Chinese. Drawing on post-colonial theory and translation studies, two articles on queer theory's relation to Taiwan, "How to Be Queer in Taiwan" and "Queer Theory Goes to Taiwan", are forthcoming in edited collections on gender and sexuality.

By problematising the question of Chineseness in relation to the concept of Chinese cinemas, my investment in the issue of Chineseness (along with scholars such as Rey Chow, Ien Ang and Allen Chun), rests on the belief that it should not be a China-centred, essentialist and hegemonic signifier. In an article that deconstructs the rhetoric of "roots-searching" in Singapore as rooted in an anxiety of castration, I conduct a queer reading of Chineseness and proposes rootlessness and shamelessness as alternative ways of embodying Chineseness.

I am currently developing a book project on the Taiwan-based director Tsai Ming-liang and a cinema of slowness. My project 'Chinese Cinemas in the 21st Century: Production, Consumption, Imagination' is funded by the Leverhulme Trust International Networks scheme.

I am an Editorial Board Member of the peer-reviewed journal, New Cinemas: Journal of Contemporary Film

I am an International Editorial Board Member of the Queer Asia book series published by Hong Kong University Press.

I am a member of the International Advisory Board of the Asian Film Archive in Singapore.