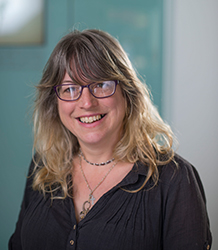 Director of the Flexible Combined Honours

I am Director of the Flexible Combined Honours programme, which sits in the College of Humanities, and am Professor of Renaissance and Magical Literatures and a Fellow of the Royal Historical Society. For administrative purposes I am based at the Streatham Campus in Exeter for much of the time, but I teach at the Penryn Campus in Cornwall where my specialist Witchcraft and Magic in Culture option is based. My research investigates witchcraft and magic in history, and how writings about magic and the supernatural and those about identity intersect from around 1500 to the present day. I’m interested in meetings between cultures and disciplines, past and present.

I'm currently finishing up The Witches of St Osyth, the history of an Elizabethan witch trial for Cambridge University Press and an exciting new history book that I can't talk about yet... I am the editor of the CUP series Elements of Magic.

My research is broadly an enquiry into the British and American history of the supernatural from prehistory to the present, focusing on witchcraft and magic. I've been interested in witchcraft since the 1990s, and have recently returned to the first witchcraft news pamphlet that I ever read, A True and just Recorde, about a group of women and a man accused of witchcraft in the Essex villages around St Osyth in 1582.

I'm writing the first full history of this case in a monograph for Cambridge University Press (forthcoming 2022).I also edit the CUP series Elements in Magic, which is designed to bring out short, punchy new contributions to the field of magical studies from historians, anthropologists, literary scholars, archaeologists, medical humanities scholars, geographers, scholars of religion worldwide and scholars of film, media and social media.

In 2019 I hosted Professor Jay Johnston (University of Sydney) for a series of VIAF events on magic, landscape and religion run with Professor Nicola Whyte (History, Exeter) and Dr Will Pooley (Bristol).

I'm interested in hearing from anyone who would like to work on the history or literatures of the supernatural, especially witchcraft and magic. I’m a supportive and enthusiastic supervisor who has been helping PhD students undertake their dream projects for 20 years. Send me an email and we can chat about your ideas...

As well as work for the AHRC Being Human Festival (‘Modern Folk’ and ‘Magic from the Inquisition to Harry Potter’) I often give one-off talks and work with artists and writers: the ‘Mysticism, Myth, Nationalism’ conference in July 2010 (organised by Shelley Trower, Garry Tregidga and myself) included a public exhibition of paintings, poems and artefacts (on campus and at the Cornwall Centre, Redruth) many of which were loaned by the National Trust, a creative writers’ event showcasing the work of a local arts publisher (Fal Publications) and featuring Penelope Shuttle and others, and several public lectures. I have also delivered public talks at the Cornwall Centre, Lowender Peran Festival, the Historical Association, the Du Maurier Festival, for U3A, the National Trust, the Pagan Federation, London Geekfest and Harry Potter Society. Most recently I spoke along with creative writers and artists at the 2019 Certaine Wytches event with the Devon Guild of Craftsmen.

See also media work under my "media" tab. My agent is Joanna Swainson at Hardman and Swainson.

I was ‘rapporteur’ for the ESRC on a project to create the Survey of Scottish Witchcraft database (2003). I was on the editorial committee of the Pickering and Chatto series English Witchcraft 1560-1736 (2003). I review and/or read submissions regularly: for Women’s History Review, Preternature, Renaissance Quarterly, Seventeenth Century Journal, Folklore, Social History, National Identities, Early Modern Literary Studies, The Historian, the British Society for Literature and Science website, Supernatural Studies, Modern Language Review, Acta Borealia, Journal of Ecclesiastical History, Gramarye etc and read proposals and completed books for Routledge, Yale University Press, Boydell and Brewer, Continuum, Ashgate and other publishers.

I was Editor of the European Journal of American Culture until December 2009, and am on the editorial board of Revenant, a new peer-reviewed e-journal of supernatural studies. I organised the Mysticism, Myth, Nationalism conference in 2010.

Press: My work has been featured in The Guardian, The Metro, The Telegraph, Archaeology, The Express and Echo, Evening Herald, Devon Life, The Catholic Herald, The Western Morning News, Whitby Gazette etc. Here’s a sample “Halloween” story: https://www.theguardian.com/lifeandstyle/2017/oct/31/west-country-witches-witchcraft-witches-hanged

I am regularly consulted by media researchers – e.g. a Radio 4 radio drama about witches, Ursula and Boy (2010), C4’s documentary The Pendle Witch Child (2010), a BBC One Show report on an archaeological site in Cornwall (2011), and the BBC’s documentary series The Real White Queen and her Rivals presented by Philippa Gregory (2013).

Online, podcasts and blogs: Recent interviews for podcasts include:

I was interviewed for the Stylus Media Group’s consumer trends report on contemporary spirituality in July 2017, which resulted in the Modern Mysticism report: https://www.stylus.com/nwczzp (behind paywall).

My agent is Joanna Swainson at Hardman and Swainson.

I am a Fellow of the Higher Education Academy. My undergraduate teaching has included:

I offer the popular optional module HUC3007/3013 Witchcraft and Magic in Culture primarily to History and English students, and it is also open to geographers, law and politics students, and intercalating medical students.

I have taught on the summer school programme at Exeter for several years.

I was born on the Isle of Wight and educated at Northwood Primary School, Somerton Middle School and Cowes High School.