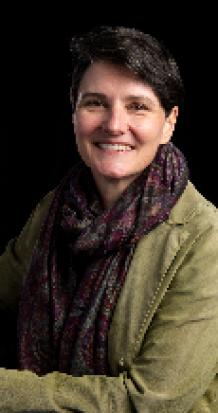 Pascale Aebischer is Professor of Shakespeare and Early Modern Performance Studies. She specialises in the history of the performance of early modern drama (including Shakespeare), with an emphasis on 1580s-1700 and 1980s-present. She has a particular interest in bodies and performance technologies (from candlelight through social media to 'live' theatre broadcast and digital performance). These interests are reflected in her teaching, which focuses on early modern - Restoration theatrical cultures and performance practices, Shakespeare, and present-day performance on stages and screens.

From 2021 to 2023, Pascale Aebischer is leading the coordination of the AHRC's Covid-19 research portfolio as Principal Investigator of The Pandemic and Beyond: the Arts and Humanities Contribution to Covid Research and Recovery.

Please note that I work part-time, from Monday-Thursday, and divide my time between teaching/student-facing work (Wednesday mornings and Thursday afternoons) and work on The Pandemic and Beyond.

My research is mostly situated at the intersection between the early modern playtext and theatrical culture on the one hand and present-day performance on the other, with a particular focus on bodies, gender, race, violence, ethics, media, or spectatorship - or all of these together. Past research and book projects include Shakespeare's Violated Bodies: Stage and Screen Performance (CUP, 2004),  Remaking Shakespeare: Performance Across Media, Genres and Cultures (Palgrave Macmillan, 2003), Jacobean Drama (Palgrave Macmillan, 2010), Performing Early Modern Drama Today (CUP, 2012, "Choice Outstanding Academic Title 2013"), Screening Early Modern Drama: Beyond Shakespeare (CUP, 2013), and, with Susanne Greenhalgh (Roehampton) and Laurie Osborne (Colby), Shakespeare and the 'Live' Theatre Broadcast Experience (Bloomsbury/Arden Shakespeare, 2018; paperback 2019).

My most recent two books are concerned with how digital technologies have transformed how we watch Shakespeare. The first, an (only just) pre-pandemic book, is Shakespeare, Spectatorship and the Technologies of Performance (CUP, April 2020; winner of the David Bradby Monograph Prize 2021). The book develops work in phenomenological approaches to performance and spectatorship, as well as work on digital performance, scenography and theatre architecture and reconstruction. I am concerned with how technologies from candle-light to live video and theatre broadcast shape the spatial dynamics and dramaturgies of early modern drama and how audiences understand the plays. The second, a book written during the Covid-19 pandemic, takes this work further and examines digital spectatorship of 'viral' Shakespeare productions during the first and second lockdowns of 2020. Viral Shakespeare: Performance in the Time of Pandemic (CUP, 2021) investigates the effects of binge-watching Hamlet in lockdown, thinks about what it's like to watch Shakespeare in languages other than English, and includes a 'deep dive' into the live Zoom performances pioneered by Creation Theatre and Big Telly in response to the Covid-19 pandemic to think through the concept of 'Zoom performativity' and how theatre-making in itself became a political message in the face of Covid-restrictions and economic hardship and marginalisation for the creative industries.

I am currently coordinating the AHRC's Portfolio of funded Covid-19 research. For more information on this work, see The Pandemic and Beyond: The Arts and Humanities Contribution to Covid Research and Recovery. This work builds on and integrates my earlier AHRC/UKRI-funded project, Digital Theatre Transformation: A Case Study and Digital Toolkit , which explored how Creation Theatre (Oxford) managed its complete digital transformation of its backstage and creative operations, establishing a business model and creative practice that enables the company to continue paying freelance creatives Equity wages. We worked with representatives of Equity and with members of Creation Theatre and Big Telly (NI) on documenting the processes of digital transformation and the business model that enabled it, and to produce detailed research of audience responses, including an assessment of the perceptions of value-for-money for live digital shows.

I am also involved in a project with colleagues in the UK (Freyja Cox-Jensen, Harry McCarthy, Maria Shmygol) and Switzerland (Lukas Erne) concerned with using practice-based methodologies to explore plays by Shakespeare that were translated into German and used as touring scripts in the seventeenth century.

I am the PI on The Pandemic and Beyond: the Arts and Humanities Contribution to Covid Research and Recovery.

The ‘Pandemic and Beyond’ project is hosted by the Wellcome Centre for Cultures and Environments of Health at the University of Exeter and embedded in the College of Humanities, with team members from Humanities (Prof Pascale Aebischer, Dr Benedict Morrison, Dr Rachael Nicholas), the Medical School (Prof Victoria Tischler), the Business School (Prof Sarah Hartley), and Social Sciences and International Studies (Prof Des Fitzgerald). The team will build partnerships with academic communities, the wider public connected or impacted by the AHRC Covid-19 projects, Non-Governmental Organisations and policymakers to inform local, national and international crisis response and policy. The project will begin in March 2021 and conclude in February 2023.

I am very interested in hearing from graduate students who would like to carry out a research project on Shakespeare and early modern performance studies, theatre history, spectatorship, feminist and/or queer responses to early modern drama, or adaptation studies. Since the advent of Covid and the digital turn in theatre, I have a particularly strong interest in new forms of digital theatre involving early modern texts. With Shakespeare so (problematically?) present in curricula and performance cultures across the world, I would welcome the opportunity to work with research students who have their own cultural perspectives and non-Western methodologies to bring to bear on the study of Shakespeare in performance. I have a particular interest in theatre architecture, media and technology, including digital technologies, and have a long-standing fascination with the work of Derek Jarman and other counter-cultural artists who have engaged with the drama of the early modern period.

As the PI for Digital Theatre Transformation, I have been interviewed for BBC Radio Devon and have done media work that has been published in The Daily Telegraph  and The Observer. I have also published research findings in the trade Press, with articles in Equity Magazine and Quarto Magazine.

My current work as PI on The Pandemic and Beyond: The Arts and Humanities Contribution to Covid Research and Recovery involves public engagement work, including podcasts, social media, media work and webinars aimed at the general public and policy makers.

In relation to the Digital Theatre Transformation Covid-19 rapid response project, I have talked about how theatres can use digital media to continue performing during lockdown on BBC Radio Devon and have commented on the Government's funding package for theatres in the Daily Telegraph.