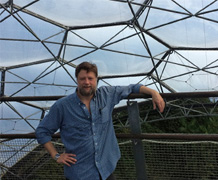 Rob Smith at the Eden Project

A University of Exeter novelist and short story writer recently spent time at the Eden Project as the attraction’s Writer in Residence.

Dr Rob Magnuson Smith, Lecturer in English and Creative Writing at Exeter’s Penryn campus, is the award-winning author of novels including The Gravedigger and Scorper. In April he spent five days living near the Eden Project Biomes at YHA Eden Project, powered by Snoozebox.

He researched stories about plants, flowers and bacteria from the Eden Project current exhibits and proposed future exhibits including Invisible Worlds, some of which feature in his new short story, Henry and the Moon Baby. The protagonist is a calamitous clay-eating parrot named Henry who causes a shipwreck off the Lizard Peninsula.

"Every day I learned more than I imagined from the Eden staff," Dr Smith said. "At night I was allowed to study the place in the moonlight. The views gave me inspiration – I myself am a moon baby."

Dr Smith will launch the story, to be published by Guillemot Press, with a reading at the Port Eliot Festival on Friday 29 July at 15:30 and later at the Helston Museum in September. He will also participate in future storytelling workshops at the Eden Project.

Dr Smith hopes his experience will encourage more writers to produce work inspired by the Eden Project, and contribute to events at Eden.