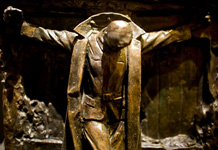 A new work which sets the words of World War I soldiers to music to commemorate the centenary of the conflict is to receive its world première at a prestigious music festival.

The War Passion, a chamber oratorio for soloists, choir and instrumental ensemble, grew out of Dr. Lancaster’s work on the poetry and music of World War One, drawing upon the work of well-known poets such as Wilfred Owen and Siegfried Sassoon as well as other less well-known poets and poems of the war.

The premiere performance of War Passion takes place in Cirencester Parish Church as part of the 301st Three Choirs Festival, on Sunday 24 July. This is the 121st birthday of one of those poets featured in the work, Robert Graves, who was so gravely injured during the Battle of the Somme, exactly a century ago, that he was mistakenly officially reported as having been killed.

Dr. Lancaster, a British Academy Postdoctoral Fellow in English, said: “I hope that this new music will dramatise and bring to life some of the intensity, poise and beauty of the words written in the trenches and afterwards by those who fought in the war, lifting the poetry off the page.

“The work has grown directly out of my work on Ivor Gurney and the war poets. I am a singer, musician and lapsed composer, so it felt like a natural step to return to composition to express the depths with which I feel this poetry. It has been a daunting task, taking three years to complete from first idea to finished work, but it is hugely thrilling and a great privilege for me that it is being performed at the festival.”

War Passion is dedicated to two of Dr Lancaster’s grandparents, and to those many men who, like them, fought in the World Wars and survived.