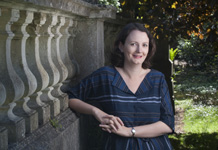 A University of Exeter expert who brought to life the unusual romance between politician Benjamin Disraeli and his wife has won a prestigious literary prize for her work.

Dr Daisy Hay, Senior Lecturer in English Literature and Archival Studies in the Department of English, has won a 2016 Somerset Maugham Award for her book Mr & Mrs Disraeli – A Strange Romance.

The £2,500 award was presented at the Society of Authors annual Authors’ Awards ceremony in London yesterday.

Judge Adam O’Riordan said: “This compelling portrait of a courtship and marriage doesn’t miss a beat and grips from start to finish.”

The book, published by Chatto and Windus, tells the tale of the unlikely couple and how they refused to perform and conform. When they met Mary Anne Disraeli was the daughter of a sailor, 12 years Disraeli’s senior, and married to someone else. Benjamin was of Jewish descent, a mid-ranking novelist who was mired in debt. Their odd match was a hot topic in the Victorian press and among society gossips, but the Disraelis rose to the top of the social and political pile.

Mr & Mrs Disraeli – A Strange Romance received glowing reviews when it was published in 2015.

Dr Hay said: “I am delighted to receive this prize: it is a huge honour for my work to be recognised in this way.

“The book was such a joy to write, and it was enriched in many different ways by my colleagues and students at Exeter. I am thrilled that people continue to be moved and intrigued by the Disraelis’ strange and wonderful story.”

Dr Sam North, senior lecturer in English at the University of Exeter, also won the Somerset Maugham Award for fiction in 1990 for his first novel, The Automatic Man.

Dr Hay is also the author of Young Romantics: The Shelleys, Byron and Other Tangled Lives, for which she was awarded the Rose Mary Crawshay Prize by the British Academy and highly commended by the John Llewellyn Rhys Prize.