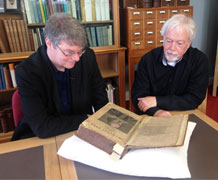 A University of Exeter expert will describe his fascinating work to unlock the secrets of Shakespeare’s grave at an event held to mark 400 years since the playwright’s death.

Professor Philip Schwyzer has been trying to solve the mystery of the curious forbidding curse on the writer’s tombstone. He will share information about his quest during a public lecture at Exeter Cathedral next week.

Visitors will also be able to view an early collection of Shakespeare’s plays which is held in Exeter Cathedral Library. This rare book is known as the ‘second folio’. The engraved portrait of Shakespeare on the title-page of the Exeter copy has been hand-coloured.

The wording on Shakespeare’s grave, in Stratford-upon-Avon, says: “Good frend for Iesus sake forbeare. To digg the dvst encloased heare. Bleste be ye man yt spares thes stones. And curst be he yt moves my bones.”

Professor Schwyzer said: “I have been researching Shakespeare’s grave for many years. These sort of curses were not conventional and it was very rare for any wording of this kind to be found on gravestones.

“Of the handful that are known, most threaten divine vengeance on vandals or iconoclasts who might be tempted to deface the monument. Shakespeare’s inscription, by contrast, threatens to curse a church official, the sexton, who in the ordinary pursuit of his duties might open a grave to make room for another burial. In this respect, it is both highly audacious and very probably unique.

“Almost all Shakespeare scholars and editors have been reluctant to ascribe these verses to Shakespeare himself, but this anxiety about exhumation is echoed in many of his plays and I have strong reason to believe these verses are his own. Many of his tragedies and histories feature scenes involving exhumation or interference with the bodies of the dead. Almost always treated as a matter of horror and disgust, the theme is found in Richard III, Romeo and Juliet, Macbeth, and most famously in the gravedigger scene in Hamlet.

“If he did write these words, should this affect our understanding of Shakespeare as a writer and a man?”

Exeter features in several Shakespeare plays. Rougemont Castle is mentioned in Richard III and the Duke of Exeter is a character in history plays including Henry V. There are no records of Shakespeare coming to the city when he was an actor and toured the country in productions, but his company did perform in Bristol and along the South Coast, so it is likely he visited Exeter or passed nearby as he travelled between the two places.

It is not known how Exeter Cathedral came to have the folio. It will be on display during the day there from April 21 to 23 and is believed to be the only copy in the South West.

The lecture will be held on Thursday, 21 April in the Exeter Cathedral Chapter House. Tickets can be booked here.