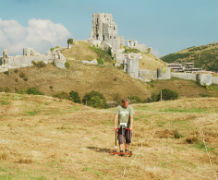 England’s first civil war, a real Game of Thrones power struggle between two cousins, brought anarchy to the UK in the twelfth century AD, the first archaeological study to assess the impact of the conflict has shown.

The violence and turbulence of the time meant that members of the nobility fortified castles, but also villages and even churches, as they fought to protect their interests and project a powerful image of authority.

Royal cousins Stephen and Matilda fought each other for the throne of England in a conflict that lasted nearly 20 years. The extent of political breakdown, the motives of those involved and the causes of the conflict are still debated by historians.

University of Exeter academic Professor Oliver Creighton, along with a team of researchers including Dr Duncan Wright from Bishop Grosseteste University, are the first experts to assess the physical impact of the bloody struggle on England’s landscape. Until now historians have mainly relied on chronicles and charters written at the time.

They have found churches were fortified for the first time, and that dozens of ‘siege’ castles were built — menacing structures designed to besiege other castles and towns and to intimidate the enemy.

Professor Creighton and his team extensively surveyed the remains of twelve carefully selected sites, including castles and settlements, and analysed existing archaeological finds including coins and weaponry. The work was completed around the country using state of the art survey techniques alongside the examination of historic maps and documents.

Professor Creighton said: “This study allows a new discussion to take place about the real impact of King Stephen’s troubled reign on society, towns and villages, churches and the landscape. Most people would think of ‘medieval warfare’ in terms of large-scale pitched battles; our study shows how the conflict was instead characterised by devastation of the landscape and by siege warfare. These sieges often resembled a prolonged stand-off between the two sides rather than close combat and some have left traces in the landscape in the form of siege castles.”

Stephen, the grandson of William the Conqueror, was king of England from 1135 to 1154, following a coup after his uncle Henry I died without a male heir. For much of this time his cousin Matilda, Henry’s daughter, wrestled for the throne. The conflict eventually ended in a stalemate with no clear victor. A treaty was eventually negotiated, and Stephen agreed to recognise Matilda’s son Henry of Anjou, later Henry II, as his heir.

Stephen’s reign saw the tightly controlled mint network break down, with rival mints operating, especially in the north and west of England. These issued unofficial coins, sometimes in the names of rivals to the king. Archaeologists have used the coins to explore when different areas came in and out of royal control. They have also analysed how hoards of treasure — coins — were buried in hotspots of the conflict, possibly by people trying to hide their savings when they saw battles were likely to be fought in their area. Some churches were militarised, including Hereford Cathedral, which had siege engines positioned on its tower, while the sanctuary of others were breached.

In one of the greatest hotspots of the war, around the Isle of Ely, King Stephen’s forces built a network of campaign castles to put down a rebellion led by the notorious robber-baron Geoffrey de Mandeville, in a conflict which chroniclers say transformed the landscape into a desert. Wallingford, on the banks of the River Thames, was one of the most besieged places in Britain during the civil war. The town resisted three sieges and had many siege castles built around it.

Henry II ordered many of the new castles built during the civil war to be destroyed.

Professor Creighton said: “This conflict ravaged the landscape. It was a time of violent upheaval. It was a vicious, prolonged war. We wanted to open up new perspectives on this darkly fascinating period by interpreting the material evidence — artefacts, sites and landscapes — as well as studying documents. Our research shows that for the aristocracy this was a period of image-making as well as warmongering, when amidst the turmoil lords stamped their mark on the English landscape.”

The research, which took place from 2013 to 2015, was funded with a grant from the Leverhulme Trust.