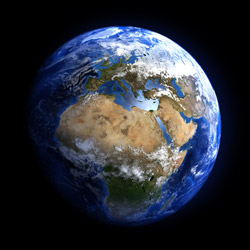 Stewardship is a prominent and influential Christian perspective on environmental ethics, but it is not the only proposal. Some alternative models of the relationship between humans and the environment are introduced below. They are not listed in any order of priority or preference and other alternatives also exist.

James Lovelock is a scientist whose hypothesis about the nature of the earth has become widely known and influential. His proposal is a scientific hypothesis, not a religious perspective, but it has been regarded by some as a quasi-religious viewpoint.

Lovelock views the earth as a kind of superorganism, 'a planetary-sized ecosystem called "Gaia"'.1 This complex system automatically self-regulates in ways that maintain an environment in which life can flourish.

Lovelock finds the idea of stewardship unhelpful. He writes: '...it requires us to be wise enough to regulate the environment for the common good and to be better at doing this than the evolved system that has kept the Earth fit for life for nearly four billion years'.2

He argues that instead of regarding ourselves as the responsible managers of the earth, we should instead acknowledge our dependence on the care with which Gaia supports life. 'We must learn to live with the Earth in partnership'.3 Otherwise, Lovelock warns, the Earth system may move itself into a state which no longer supports human life.

An important approach to reading biblical texts from the perspective of Earth has been developed in the Earth Bible project. This project is based in Adelaide, Australia, and was initiated by Norman Habel, a biblical scholar.

The project's studies tend to be critical of anthropocentrism and to reject the idea of stewardship. They treat Earth (with a capital E) as a character, not unlike Lovelock's Gaia ecosystem. Their use of the term 'mutual custodianship' expresses the idea that the earth sustains humans just as humans should try to sustain the earth.

The project has produced a set of six ecojustice principles. These were formulated in dialogue with ecologists and again include some similarities with Lovelock's proposals. For example:

The principle of resistance: Earth and its components not only suffer from injustices at the hands of humans but actively resist them in the struggle for justice.4

3. Humans as priests of creation

Stewardship has been particularly prominent within Protestant denominations. Other Christian traditions, however, have offered alternative ideas about relations between God, humans, and the world.

For example, Orthodox theologian John Zizioulas highlights the idea of humans as priests of creation. Instead of simply giving people new ethical duties, Zizioulas thinks that we need a new 'culture'. He sees this as potentially growing from the liturgical life of the Church, and particularly from its central ritual, the Eucharist.

In such liturgies, creation's gifts are offered to God. Humans serve as the crucial link between creation and God, bringing nature into communion with God and sanctifying it. Humans therefore serve as the priest of creation, offering it to God. This, Zizioulas suggests, can help to reawaken a sense of the sacredness of nature, without turning to what he terms 'paganism', with its view of the sacred presence within nature itself.5

4. Humans as part of the 'community of creation'

Biblical scholar and theologian Richard Bauckham has also been critical of the stewardship idea. However, he does not want to reject the idea but rather to qualify it and set it alongside other important themes.

Bauckham argues that Christians have neglected the Bible's view that humans, as well as being stewards over creation, are also members of what he calls the 'community of creation'.6 The 'vertical' idea of stewardship - stressing humanity's role to lead and be responsible - needs to be balanced with a 'horizontal' one, stressing humans as fellow-creatures with all other creatures. He argues that:

In developing these ideas, Bauckham draws attention to biblical texts other than Genesis 1-2. These alternative texts offer different perspectives on the relationship between humans and the rest of creation. For example:

Job 38-41: here God responds to Job's sufferings not with an expression of care and concern but with speeches that stress all the diverse wonders of creation, among which Job looks rather insignificant.

"Where were you when I laid the foundation of the earth? Tell me, if you have understanding." (Job 38.1)

Psalm 148: here, among many other texts especially in the Psalms,there is a depiction of all things joining together in praise of God:

Praise the LORD from the earth, you sea monsters and all deeps, fire and hail, snow and frost, stormy wind fulfilling his command! Mountains and all hills, fruit trees and all cedars! Wild animals and all cattle, creeping things and flying birds! (Ps 148.7-10).

Bauckham, along with others, suggests that these depictions of all creation's praising God are important for Christian environmental ethics. They imply that all creatures participate in the worship of God and so that all have intrinsic value. This places humans among - rather than distinct from - all the other creatures.

5. Divine, human and non-human relationships in a three-way model

Another biblically-based model, developed by Hilary Marlow, drawing on the work of Christopher Wright, is based primarily on Old Testament texts, especially the prophetic writings. It models the relationship between God, humans and the land (the non-human creation) in order to provide a biblical basis for environmental ethics.7

Marlow presents this diagrammatically as follows:

This model depicts the relationships between God, humanity and non-human creation as a ‘creation triangle’, reflecting the biblical conviction that all three actors are inextricably related: human action can affect the land, in positive or negative ways, and the land can be an agent of God’s blessing or punishment.

Developing a framework for a biblically-based environmental ethics, Marlow places ‘humans in the world’ at the centre of her model8 , not to give them priority but to reflect the fact that the issue in question is human morality. But the basis for morality in this model is relationship to God: it is a theocentric model, that is, centred on God.

The biblical writers’ concern with justice for the foreigners, and other disadvantaged and ‘outsider’ groups intersects with the scope of the current environmental crisis and its impact on the poor, underlining the fact that, although decisions may be taken locally they may have global effects. The affluent developed West must take into consideration the needs of the poor Majority World.

4Norman Habel (ed.), Readings from the Perspective of Earth (Sheffield: Sheffield Academic Press, 2000), p. 24. The first two of these may also be found in Laudato Si’ by Pope Francis.