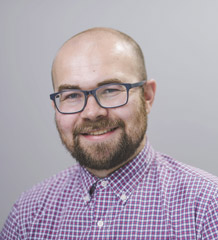 I am an Associate Lecturer in the Foreign Language Centre where I currently convene French Advanced 2 and I am also involved with French Intermediate One and Two.

I have been teaching French in the UK since 2013 (more details in the biography section) and it has been a pleasure to foster learners’ confidence, particularly with speaking. During my PGCE year, I also developed a keen interest in enhancing and sustaining motivation among second language learners, most notably studying the works of Zoltan Dörnyei and Ema Ushioda. I also follow the work carried out by the PDC in MFL group to implement research-based learning materials in my practice and am a member of both the Association for Language Learning and the Association for French Language Studies.

I grew up near the city of Rennes in Brittany in the west of France. I studied English and Italian applied to International Business at the University of Rennes 2, where I obtained a Licence (the equivalent of a BA). The year after, I started a Masters in English and Italian applied to International Marketing, at which time I applied to become a lecteur at the University of Southampton in 2013.
Working as a lecteur ignited my passion for teaching and I never came back…
After a fantastic year, I stayed in Southampton University for 2 years, during which time I taught text and speaking classes to undergraduate students with varying levels of experience (from post A-level students to finalists). I also taught French as part of the IWLP programme and contributed to the creation and delivery of the Santander course for beginners in French.
During that time, I also worked as a Foreign Language Assistant at Brockenhurst College between October 2014 and May 2016, where I learned a great deal about developing speaking skills in a foreign language and supporting students with dedicated grammar workshops and individual tutorial sessions.
In order to further my knowledge of foreign language teaching, I undertook a PGCE at the University of Reading, which I completed in June 2017. From September 2017 to August 2018, I worked for the University of Birmingham as a French Language Instructor for the Languages for All section where I taught languages courses and Distance Learning courses (A2-B1).
In September 2018, I joined the University of Exeter to teach French in the Foreign Language Centre.