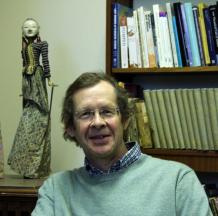 I am a historian of the theatre, which means that I am someone who wants to understand the present, because it is the past that has made each of us who we are. Undergraduate teaching  always informed and stimulated my research, while postgraduate supervision opened up countless new horizons. I have now retired from teaching, and am pursuing community theatre ventures in Oxford, where I am a member of Wolfson College.

My main historical areas of specialism have been the theatres of Greece and Elizabethan England, and important themes in my work have been performance space, masked acting, festival, and the function of theatre in society. I have always resisted limiting myself to one historical period in order to take a broader view of how theatre has evolved. I have recently completed a book on 'rhetorical acting'. This is pointing me to undertake as my next project an examination of theatre in its relation to democracy, public speaking and the inescapable necessity of theatricality.

My research began in the field of Shakespeare, where my first major book was Shakespeare’s Clown, a study of the Elizabethan clown. I followed up this book with a study of A Midsummer Night’s Dream as a wedding play, which laid some of the ground for my current interest in theatre and time. A monograph called Theatre & Time was recently published in the Palgrave ‘Theatre &’ series.

Greek theatre has been the other foundation stone of my research. My first major publication here was a monograph Masks of Menander, analysing the masking code that shaped the performance of Greek comedy in the fourth century BCE, a code that modelled the form of an ideal society. I pursued my interest in Greek masks in Mask and Performance in Greek Tragedy, a study of fifth century masking that drew both upon archaeology and upon 20th/21st century experimentation with the possibilities of the theatrical mask. I also broke new ground with Tragedy in Athens, a study of performance space and the way space made meaning in classical performance. This volume prepared the way both for a widely used student introduction to Greek theatre Greek Theatre Performance (also translated into modern Greek), and for my Short History of Western Performance Space (also translated into Polish), a study of seven basic configurations of the actor audience relationship.

More recently, I investigated the social function of theatre in relation to understandings of the classical concept of the citizen in Theatre and Citizenship: the History of a Practice - in essence asking whether theatre acts primarily upon self-aware individuals, or upon groups and feelings of group membership.

In collaboration with Christine Dymkowski, I edited the Cambridge Companion to Theatre History published in 2013. We attempted in this project to focus on the question of why the past should matter to the present, and assembled a powerful team of contributors for the project.

I have recently completed a study of performance in the 18th century theatre of Drottningholm, co-authored with Willmar Sauter of the University of Stockholm. This book is distributed in hardcopy by the University Presses of Exeter and Chicago, but can also be viewed online at www.diva-portal.org/smash/get/diva2:756254/FULLTEXT01.pdf  My IFTR keynote lecture can be viewed on https://www.su.se/ike/om-oss/nyheter/david-wiles-presenting-the-theatre-of-drottningholm-1.285938


This work has prepared the ground for a substantial project that is currently in press,  a study of classical acting, investigating how Roman antiquity provided professional actors for many centuries with a language through which they could articulate debates about the craft of acting. I see Prince Hamlet as paradigmatic of theoreticians who fail to understand how actors actually work. I challenge the idea that important debates about acting only began with Stanislavski. The Players' Advice to Hamlet: the method of rhetorical acting from the Renaissance to the Enlightenment will be published by CUP in 2020.  https://www.cambridge.org/gb/academic/subjects/arts-theatre-culture/british-theatre/players-advice-hamlet-rhetorical-acting-method-renaissance-enlightenment?format=HB

I envisage that my next major project will address the relationship between rhetorical acting and democracy.

Publications since the date of my formal retirement are listed below:

Wiles D (2019) On the Greekness of Terzopoulos. In Dionysus in Exile: The Theatre of Theodoros Terzopoulos. Theater der Zeit.

Wiles D (2017). The environment of theatre: experiencing place in the ancient world. In Revermann M (Ed.) A Cultural History of Theatre in Antiquity. Bloomsbury, 63-82.

In the acknowledgements to my forthcoming book I note the importance of my engagement with the Stockholm ‘Performing premodernity’ research group, alongside other important collaborations with Anna Sica at the University of Palermo, with the Institut de Recherche sur la Renaissance, l'Age Classique et les Lumières at Montpellier, with the TaPRA Actor Training Working Group, and with the Archive of Performances of Greek and Roman Drama in Oxford. Membership of the Theatre Historiography Working Group of the IFTR has kept me thinking about the wider implications of my work.

I am currently translating Aristophanes' Ploutos, for performance by Thiasos theatre company in London and Poland in 2020. I am also working with Oxford medievalists to present a play in Old French in April 2020.

In my previous job at Royal Holloway, I supervised students and saw 16 through to completion, many of them now having academic jobs. Several were practice based.

My work on the mask was informed by a close relationship with professional mask makers like Michael Chase and Thanos Vovolis. As a Greek theatre specialist, I have worked as a consultant to Gardzienice theatre company in Poland. I was involved in a research project with the 18th-century 'heritage' theatre of Drottningholm, examining the function of its summer operatic season. In April 2013 I was invited to address the Opera Europa conference of theatre managers and practitioners on the theme of opera and citizenship. Since retirement, I have participated in Oxford University public engagement projects in the fields of utopian thinking, and medieval performance.

Between 2011 and 2013 I convened the Theatre Historiography working group of the International Federation for Theatre Research. I am a regular attendee at the IFTR, and will be delivered a keynote address at the annual conference in Stockholm in 2016. In 2018 I convened a meeting of intenational theatre historians in Bloomsbury, in collaboration with colleagues from Exeter and RHUL. An account of the discussion will be published by Theatre Research International in the summer of 2019.

My teaching at Exeter always involved a dimension of practice. I regard it as a creative activity, and therefore never taught the same course in the same way twice. I particularly enjoy projects which test out historical propositions, and courses which allow students to bring their own experience of the world to bear upon their work.

Department of Drama, University of Bristol, Ph.D. 1975-78 (title: 'The servant as master: a study of role definition in Classical and Renaissance popular comedy')

lecturer in drama and theatre studies, University of London,