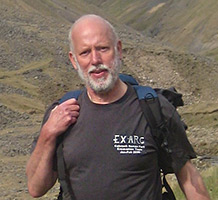 I am an economic historian and archaeologist specialising in the extractive industries, particularly non-ferrous metal mining. My affiliation to the University of Exeter commenced in the early-1990s, initially as a post-graduate student, followed by a short spell as a Research Fellow in the Department of Archaeology, and latterly as an Honorary University Fellow.

The focus of my research has primarily been on the production of silver, from the Medieval Period through to the 19th and early 20th centuries, in Britain and in eastern Australia, working on documentary sources and relating those to the field evidence. I have also developed a keen interest in the supply of iron ores to the early steel industry in Britain and in France.

Outside my specialist interests, I have worked extensively with the voluntary sector, on conservation issues related to mining heritage and directing the assessment of archaeological resources on a national basis. I also work with community groups, planning and managing the investigation of both historical and archaeological evidence.

o   Comparisons with the development of silver mining in France

o   The recovery of silver from zinc ores – the activities of Dillwyn & Co, Swansea

o   The sources of ores (iron and the steel hardening metals) used in the British steel industry, particularly during times of conflict

My research into the history of non-ferrous metal mining was brought into focus as a result of my post-graduate studies in the 1990s on the mining of silver in England and Wales during the Late Medieval Period, moving from the study of individual mines to an examination of the industry as a whole and the factors affecting of its development. Whist the consideration of the physical evidence has always had a part to play in the study of historic mining activity this is being taken forward in a structured manner, influenced in part by the work carried out with Prof. Steve Rippon and Dr Chris Smart in the Department of Archaeology, 2006-8, which led to the publication of Mining in a Medieval Landscape: the Royal silver mines in the Tamar Valley (Exeter Press, 2009). My research work on the mining and processing of silver-bearing ores in eastern Australia has been enhanced by co-operation with Dr Lorna Anguilano, Brunel University, in the analysis of smelting residues, providing an added dimension to the examination of the archaeological evidence.

The move to a study of the iron ore resources for steel industry was initiated in 2005/5, perhaps as a diversion from silver! Over the last few years this has developed with the opportunity to examine in detail the operation of mines in Pyrénées-Orientales, along with a focus on the role that metalliferous mineral production had in times of conflict over the 100th anniversary of the First World War.

I came late to formal academic study, having spent 23 years serving in the Royal Air Force. Over that time I had developed a deep interest in the history of mining and, whilst stationed at RAF Chivenor, near Barnstaple, began the primary documentary research required to fully investigate the story of non-ferrous metal mining in the north of Devon. In 1994 I came to Exeter to read Economic and Social History, on a part time basis, graduating with a PhD in 2003 (Silver Mining in England and Wales, 1066-1500). Three years later I co-operated with Prof. Steve Rippon, Department of Archaeology, in a successful bid for Leverhulme Trust funding for a study of the landscape archaeology of medieval silver mining in Devon – published as Mining in a Medieval Landscape: the Royal silver mines in the Tamar Valley (Exeter Press, 2009).

My work on medieval silver mining has led to co-operation with colleagues on various aspects of the industry, including the investigation of evidence for post-medieval smelting at Combe Martin (see Paynter, et al.  Lead Smelting Waste from the 2001-2002 Excavations at Combe Martin, Devon, English Heritage, Centre for Archaeology, Report 79/2003). At the same time I have expanded my research interests into other sectors of the historic mining industries – including silver production in eastern Australia in the late 19th / early 20th century, and the sources of iron ore for the steel industry (on the latter, see Claughton, ‘Mining in the mountains: the development of aerial ropeways on the iron mines around the Canigou massif (Pyrénées-Orientales, France),’ forthcoming, Proceedings of the 11th International Mining History Congress, Linares, Spain, September 2009). For a list of publications, see the link to my CV.

The value of archaeological investigation in respect of the study of historic mining activity has become evident as my research work has progressed, and my work has subsequently moved in that direction. As the Conservation Officer for the National Association of Mining History Organisations (NAMHO) I am directing the development of a Research Framework for the Archaeology of the Extractive Industries in England – with financial support from Historic England. The first part of that Framework was published as Mining and Quarrying Archaeology in England (2016) – copy available from http://www.namho.org/research.php I have also managed the delivery of a community archaeology programme, The Bordley Township Project, investigating the landscape of upland settlement in the Yorkshire Dales, and carried out a small amount of consultancy work. In 2014 my work in archaeology was recognised when I was elected as a Member of the Chartered Institute for Archaeologists (MCIfA).