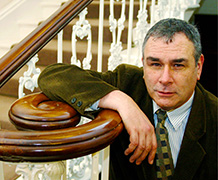 Dr Gray believes he has uncovered Devon and Exeter-specific swearwords

Calling someone a nippy or ninnycock today might not cause much offence – but hundreds of years ago if you wanted to be rude these were among a rich choice of crude words available.

Today we have a limited number of uninspiring swear words based only around genitalia or sexual innuendo. But in the Elizabethan era citizens had a bountiful number of insults to use, and used them inventively.

New research by University of Exeter expert Dr Todd Gray MBE has uncovered some long-forgotten phrases used for name calling. These are now available in a new swearword “dictionary”, How to Swear like An Elizabethan in Devon. Dr Gray also describes the fruits of the 30 years he spent combing public records to find the insults in a new book, Strumpets & Ninnycocks.

Dr Gray read hundreds of slander cases heard before courts in Devon from 1500 to 1650, reading 40,000 ancient documents at the Devon Heritage Centre. They reveal the insults used hundreds of years ago. He has found men were ridiculed differently than women - men were mocked for being unintelligent whereas only women were called scolds or eavesdroppers. Both were called drunkards, beggars and witches. Like today, sex was also used as a reason to ridicule men and women.

Dr Gray believes he has uncovered Devon and Exeter-specific swearwords, including nippy and ninnycock, both reference male genitalia.

Dr Gray said: “This is the first time anyone has looked into the history of name-calling in Devon. The insults used were fairly sharp and outrageous then, and people had to appear before the court for using them, but perhaps they are not shocking to us now.

“Papers of this kind did not exist afterwards – hence we know more about name-calling 500 years ago than we do for the Victorian period. At the heart of the slander cases was the importance of having a good reputation. This information is new to historians partly because of the state of the documents - some have been eaten or soiled by vermin, they were damaged when the Germans bombed Exeter Cathedral in 1942.’