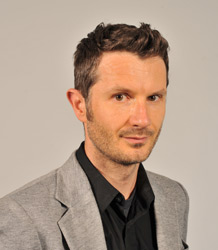 Prof. James Lyons is the author of Selling Seattle, profiled in The New York Times as a book 'a visitor ought to read to truly understand the American cities and regions where they live, work and travel.' Read the profile here.  He has also appeared in The New York Times talking about his research on Starbucks. Read it here. Prof. Lyons was amongst the first scholars to analyse Starbucks' power as a global brand, in his widely-cited Cultural Studies article '‘Think Seattle, act globally’ Speciality coffee, commodity biographies and the promotion of place.'

Prof. Lyons is also the author of Miami Vice, described by Prof. David Thornburn (MIT) in his Cinema Journal review as 'the richest account of a single television program I've ever read', and co-editor of Quality Popular Television , Multimedia Histories: From the Magic Lantern to the Internet, and The Rise of the American Comics Artist: Creators and Contexts. He is one of the founding editors of the film journal Scope and serves on the editorial advisory board.

His most recent book is entitled Documentary, Performance and Risk, and explores how some of the most significant recent American feature documentaries use performance to dramatically animate major categories of risk. It was described by Prof. Laurie Ouellette (University of Minnesota) as 'conceptually innovative, beautifully written, and politically timely.' You can listen to him being interviewed about his reseach for the Factual America Podcast here.

He was awarded £50,000 to work with award-winning advertising agency Rubber Republic on a documentary on risk and everyday life as part of the AHRC's REACT Future Documentary scheme. You can watch the documentary here: http://risktakersguide.com/. The documentary won the Ramillas Interactive Fund Award at Sheffield International Doc/Fest.

Prof. Lyons' work on risk has extended to writing a case study on the visualisation of climate change for the Government Chief Scientific Advisor's report "Innovation: Managing Risk, Not Avoiding it", and he was on the expert panel of the EPSRC-funded network Models to Decisions (M2D), which explored decision-making under uncertainty.

He has also published widely on the subject of American independent film (see publications). Together with Yannis Tzioumakis he is currently working on a new book of original essays, entitled Indie TV: Industry, Aesthetics and Medium Specificity, which examines American independent film's interface with the converged landscape of contemporary television. The book will be published with Routledge.

I am interested in considering research projects across the broad spectrum of US film and television.

Tom Fallows, ‘Survival of the Dead”: Manufacturing Independence in the American Film Industry. An Exploration of the Political Economy of Laurel Entertainment, 1974-1988, 2015-2019. University studentship funded

Chris Davies, ‘The Historical Epic on Film,’ 2012-2015.
Dr. Davies now works at the British Board of Film Classification as a Senior Compliance Officer. His thesis was published as a monograph by Bloomsbury Academic in 2019.

Jean Pierre Magro, ‘Transmedia Film and the Independent Producer,’ 2011-2014.
Dr. Magro is now an international producer, lecturer and consultant on Transmedia storytelling, and was artistic director for Valletta 2018 Capital of Culture.

Phil Wickham, ‘Contemporary Comedy in Britain and the Culture of the New Capitalism’, 2009-2012.
Dr. Wickham is the Curator of The Bill Douglas Centre for the History of Cinema and Popular Culture.

Nick Hall, ‘The development and use of zoom lenses in American film and television from 1946 to 1974’, 2009-2012. AHRC funded.
Dr. Hall is now a research officer in the Department of Media Arts, Royal Holloway. His thesis was published as a monograph by Rutgers University press in 2018.

Stephanie Piotrowski, ‘The films of The Beatles and the development of the pop music soundtrack’, 2004-2008.
Dr. Piotrowski is lecturer in media studies at Birmingham City University. Her thesis was published as a monograph by Bloomsbury Academic in 2018.

Bogna Starczewska, ‘Woody Allen and the European City: Representations of Globalisation and the American Tourist in Europe’, 2016-present.