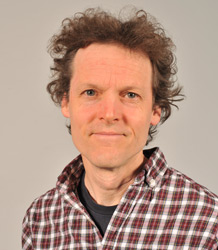 I am currently Head of the Department of English and Film.

When I am not preoccupied with that, I teach medieval English literature, and research into late-medieval religious culture, including manuscripts and the history of the book. I am especally interested in some of the more peculiar expressions of medieval religion, including hermits and anchorites, their forms of living and the books they read.

My office is Queen's Building 207.

My research interests could be summed up as medieval English religious culture. I am interested in the devotional and contemplative literature of the late Middle Ages: the works of the 'Fourteenth Century English Mystics' and their reappearance and reworking in the fifteenth and sixteenth centuries. I also work on what I term the 'non-regular vocations' of medieval England: vowesses, proponents of the 'mixed life', and especially hermits and anchorites. I am interested in the vocations' material history as well as the history of their representation, and also in texts written by, about and for them.

I am happy to talk to anyone who is considering postgraduate work in medieval English literature and culture. My particular expertise is in the religious literature and history of the late Middle Ages, and editorial and manuscript work. Current PhD students are working on editions of Middle English texts, saints' lives, prayers, and 16th-century nuns.

I am the organiser of the Exeter Symposia on the Medieval Mystical Tradition, and edit their proceedings.

I am on the Editorial board for the Journal of Medieval Religious Cultures.