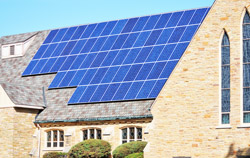 1. The prominence of stewardship

Since the 1980s, Christian churches have become more aware of environmental issues. During this time, the idea of humans as 'stewards' of creation has become increasingly prominent, as Churches have attempted to get away from the more damaging idea of domination for human benefit. Theologian Willis Jenkins writes:

Stewardship emerged as a discrete theological discourse in the 1980s, supporting a public Christian environmentalism especially associated with evangelical Protestants.1

In effect, this is a reinterpretation of the Genesis texts (see Is Christianity to blame? and Origins of stewardship) where 'dominion' is taken to mean not selfish exploitation but caring stewardship.2

2. The approaches of different denominations

There are a number of evangelical Christian organisations that strongly support the idea that Christians must care for the environment. Stewardship is a prominent theme.

The Evangelical Environmental Network has stated that:

Because we have sinned, we have failed in our stewardship of creation. Therefore we repent of the way we have polluted, distorted, or destroyed so much of the Creator's work.3

They argue that we need to take better care of creation - to become better stewards - in order to live as God desires.

The Church of England

In 1991, the General Synod of the Church of England prepared a report on 'Christians and the Environment' with the aim of encouraging 'a critical review of human responsibility to the living environment'. It states that:

Christians believe that this world belongs to God by creation, redemption and sustenance, and that he has entrusted it to humankind made in his image and responsible to him; we are in the position of stewards, tenants, curators, trustees or guardians, whether or not we acknowledge this responsibility.4

The report cites Genesis 1.26-30 as giving humans authority over the natural world. However, at the same time it reads Genesis 2.15-17 as instructing humans to both 'work' it and 'care' for it. So humans have 'dominion' over the earth but this is a gift from God. This means that humans should care for the world 'in the way God himself demands'.5

The Catholic Church understands stewardship as resulting from humans having been created in the image of God (the Catholic doctrine of the imago Dei).

The International Theological Commission (a body of theologians which advises the Pope) states that humans are:

...made in [God's] image to participate in his work, in his project of love and salvation, indeed in his own lordship over the universe. Since man's place as ruler is in fact a participation in the divine governance of creation, we speak of it here as a form of stewardship.6

Pope John Paul II, the former leader of the Catholic Church, spoke of the need for an 'ecological conversion'. He remarked that:

Man's lordship is not absolute, but ministerial…not the mission of an absolute and unquestionable master, but of a steward of God's kingdom.7

So for Catholics, 'God appoints man as his steward in the manner of the master in the Gospel parables (cf. Luke 19:12)'.8 This has been reiterated by Pope Francis in his landmark encyclical Laudato Si’ (2015), although the term and theme of ‘stewardship’ is not prominent in the document. Francis does affirm that humans have a ‘duty to protect the earth and to ensure its fruitfulness for coming generations’. He also stresses that ‘our “dominion” over the universe should be understood more properly in the sense of responsible stewardship’.9 But the major emphases of the encyclical are differently focused, particularly on the connections between ecological and social justice, and the need for radical change in our attitudes and practices. For more detail see Catholic Teaching Explored Further.

The Orthodox Church understands Genesis 1 as a call to stewardship, requiring humans to be responsible for creation. This is also linked with the Orthodox emphasis on 'deification' - the idea that humans come to share fully in God's being and nature through the process of salvation. The Greek Orthodox Church states that:

We are called to exercise dominion over all creatures on earth (cf. Gen. 1:28), i.e. to be stewards ... of God's material world, caring for it, maintaining it in its integrity and perfecting it by opening it up to God through our own deification.10

Some have suggested that Orthodox beliefs about the transformation of all creation, its incorporation into the divine, may be especially valuable ideas to inspire environmental care (see Alternatives to stewardship).

Meanwhile, the Bishops’ Council of the Russian Orthodox Church notes that the Bible

teaches that the world is a home created by the Lord, in which he placed man (Genesis 1:28). Therefore, man is steward of the created world, and not intended to worship nature, but to worship the one Creator (Romans 1:25). ...In the light of Scripture, environmental activity is understood to be as the Lord commanded, a right relationship to the created world.

(Interestingly, the same document contrasts a Christian view with the ‘pagan deification of nature, which sometimes raises nature above human beings’ and suggests that ‘the transformation of nature should begin with addressing the spiritual crisis of humanity’.)11

Many Christian charities promote care of the environment and this is sometimes based on an understanding of human responsibility to care for the earth as its stewards:

3. Other motivations for environmental care

In many of the above views, a number of other motivations for environmental care are mentioned. In particular, many appeal to love of neighbour and encourage people to act justly and out of consideration for those who are less fortunate.

Biblical texts may be used to support this basic ethical idea. For example:

This raises an interesting question: should care for the environment be based on concern for other human beings, who will suffer most from the effects of environmental damage, or should it also be based on concern for other living things? In other words, is it only humans who are worthy of our moral concern, or other species too? Is it right for environmental ethics to be anthropocentric (human-centred)? See the sections on Alternatives to stewardship and Humans and Other Animals for more on this.

However, it is important to remember that not all Christians agree that we should be concerned about preserving the natural environment, or acting to reduce carbon emissions. Some argue that biblical teachings suggest other priorities and see environmentalism as a dangerous threat - a false, non-Christian religion.

A later section, The Future of the Earth, looks in detail at such views and their origins in the biblical texts.

2Sometimes this is presented as if Genesis 1 directly instructed humans to be stewards of the earth. In the introduction to The Green Bible, published in 2008, Calvin DeWitt asserts that the Bible 'shows that dominion means responsible stewardship. God gave humans a special role and responsibility as stewards of his creation.' (p. I-26) Later, in the concluding 'Bible Studies', we are told that the 'stewardship role is important enough that it is mentioned several times in the creation narrative' (p. 1226). However, as mentioned previously, stewardship as such is not explicitly mentioned in these texts (see Origins of stewardship and Criticisms of stewardship).

3'On the Care of Creation', Evangelical Environmental Network. 2011.

4General Synod, 'Christians and the Environment: Report by the Board for Social Responsibility', The Church of England. 1991, p2.

5General Synod, 'Christians and the Environment: Report by the Board for Social Responsibility', The Church of England. 1991, p2.

7Cited in 'Communion and Stewardship: Human Persons Created in the Image of God', International Theological Commission. 2002, §73.

8'Communion and Stewardship: Human Persons Created in the Image of God', International Theological Commission. 2002, §58. An additional resource that helpfully explains Catholic perspectives on the environment is Agneta Sutton's Ecology & Stewardship: What Catholics Believe About the Environment, London: Catholic Truth Society, 2012.

12General Synod, 'Christians and the Environment: Report by the Board for Social Responsibility', The Church of England. 1991, p4.