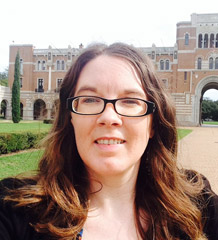 I am an American Studies specialist with satellite interests in Transatlantic Literary Studies and, particularly, the Irish Atlantic. My third monograph, Ireland, Migration and Return Migration: The "Returned Yank" in the Cultural Imagination, 1952 to present was published by Liverpool UP in March 2019 and was awarded the Michael J. Durkan Prize for Books on Language and Culture by the American Conference for Irish Studies. My second book, the outcome of a Leverhulme Early Career Fellowship, is "Other People's Diasporas": Negotiating Race in Contemporary Irish and Irish-American Culture (Syracuse, NY: Syracuse UP, 2013). My first book, Passing into the Present: Contemporary American Fiction of Racial and Gender Passing, appeared wtih Manchester UP in 2010.

As of January 2019, I am co-editor-in-chief, with Nick Witham, of the Journal of American Studies (Cambridge UP).

My research interests cluster around American, Irish and Transatlantic Literature and Culture, particularly in relation to questions of migration, diaspora and race.  My Ph.D., on narratives of racial and gender passing, was grounded in critical race theory and was committed to elucidating the ongoing importance of questioning whiteness as an identity category that passes as invisible and non-raced.  A monograph based on my Ph.D., Passing into the Present: Contemporary American Fiction of Racial and Gender Passing, was published in 2010.

Although I was concerned with race in an American, particularly African American, context at that point in my early career (2003-2006), I could not ignore contemporaneous developments in my home country, Ireland, in which the attractions of the Celtic Tiger economy meant that demographics were rapidly changing and the country was incorporating relatively large numbers of non-white immigrants. Suddenly, certain tenacious historical myths regarding Irish solidarity with other oppressed groups (Irish Americans siding with Mexicans in the Mexican American War of 1848; the Irish welcome received by Frederick Douglass on his visit to Ireland in the 1840s; the disproportionate Irish donations to Ethiopian Famine Relief in the 1980s) would be tested to their limit. In my second book, therefore, I was interested in the relationship between Irishness and whiteness in a historical and contemporary context and, particularly, in how questions of whiteness were being negotiated in a suddenly multicultural Ireland.

In 2007, I was awarded an Early Career Fellowship by the Leverhulme Trust which enabled me to research and write this project: “Other People’s Diasporas”: Negotiating Race in Contemporary Irish and Irish-American Culture, which was published by Syracuse University Press in 2013.  Using and extending my expertise in critical race studies, the premise of the book is that (re)imagining Irish diasporic experience in the United States in various ways – particularly as this relates to Irish interactions with African Americans – has, in the last decade, become absolutely central to representations of contemporary multicultural Ireland.

My most recently completed project is a cultural history of the figure of the "Returned Yank" in the cultural imagination, 1952 to present. It was published in March 2019 by Liverpool UP and was awarded the Michael J. Durkan prize for Books on Lanugage and Culture by the American Conference for Irish Studies.

I would be happy to supervise Ph.D. dissertations in any of the following areas:

With Florian Stadtler, I jointly supervise:

I act as second supervisor to:

During 2021, and with Dr. Alison Garden of Queen's University Belfast, I will be running a series of academic and public-facing events to mark the centenary of the birth of the Belfast-born writer, Brian Moore (1921-1999). For more information, please see our website. This project is supported by a British Academy/Leverhulme Small Research Grant,

In 2013, along with Jo Gill and Paul Williams, I co-organised the 58th BAAS Annual Conference at the University of Exeter.

I teach across the whole curriculum, from first year right through to M.A. My research interests in American literature are reflected in my contributions to Empire of Liberty: American Literature, 1776 to present (level 2), Harlem and After: African American Literature, 1925-present (level 3) and The Literature of Cold War America (M.A.).  Meanwhile, my contribution to Crossing the Water: Transatlantic Literary Relations (level 2) is greatly informed by my interests in American, Transatlantic and Irish Literatures.

I have also supervised undergraduate and M.A. dissertations on a wide range of topics.