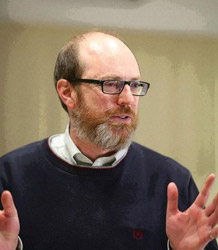 Unlike some scholars, I did not study theology and religion as an undergraduate. My BA was in Honours English and a Majors in Philosophy at the University British Columbia in Vancouver with a year (of mostly German philosophy) at McGill University in Montreal. My BA dissertation (under Dennis Danielson) was on literary theodicy in Paradise Lost and the Master and Margarita. After a Graduate Qualifying Year in the study of religion, I did a two year research MA in Religious Studies focussing on Patristics and Systematic Theology at McGill. My MA thesis, supervised Douglas Farrow and John Behr, was on theodicy looking at the role of doxology and the theology of the cross in Irenaeus of Lyons. I then trained to be a priest in the MDiv programme at St Vladimir's Orthodox Theological Seminary (Yonkers, NY just outside Manhattan) studying everything thing from canon law and Old and New Testaments to pastoral theology and liturgics. My MDiv thesis, supervised by Paul Meyendorff, was on Sergii Bulgakov's ecclesiology through an investigation of his proposals in the 1930's for limited episcopally blessed intercommunion between the Anglicans and the Orthodox in the Fellowship of St Alban and St Sergius. After finishing my seminary studies, I entered the doctoral programme in theology at the University of Oxford where I completed successively, under the direction of Paul Fiddes, an MSt by Research in Modern Doctrine and then a DPhil looking at Trinitarian theologies in modern East and West (Orthodox (Sergii Bulgakov), Protestant (Karl Barth) and Roman Catholic (Hans Urs von Balthasar)). I then was a Stipendiary Lecturer at Keble College, Oxford followed by a British Academy Postdoctoral Fellowship at Oxford and a Guest Fellowship at the Notre Dame Institute for Advanced Studies at the University of Notre Dame (IN, USA). During this time, I worked on the issues of secularisation and nationalism in the episcopate in Christian East and West. I have been a Visiting Scholar annually since 2014 at the Center for Interdisciplinary Study of Monotheistic Religions (CISMOR), The School of Theology, Doshisha University.

I am currently the Co-Chair for the Eastern Orthodox Studies Unit at the American Academy of Religion.

My academic research moves freely across academic, ecclesial and religious borders. I am now working on book projects on Orthodoxy and modernity, Bulgakov's ecclesiology, a critical anthology of writings on Florovsky and Orthodoxy and world religions. My most recent grant was with the British Council working with Fordham University on Orthodoxy and sexual diversity (https://www.fordham.edu/orthodoxy/bridgingvoices).

I am the Orthodox Associate Chaplain in the University of Exeter's Multi-Faith Chaplaincy and an Eastern Orthodox deacon. I served as a Theological Subject Expert in the Press Office of the Ecumenical Patriarchate during the Holy and Great Council of Crete in June 2016. Since 2012, I have been engaged in interreligious dialogue, especially with Islam and Zen Buddhism, and I am currently co-editing a volume for Brill on Orthodoxy and World Religions.

I welcome enquiries from students wishing to conduct research in any of the above areas.

I regularly teach an introductory module on Christian doctrine and have taught specialised modules on modern theology, inter-religious dialogue and comparative theology and spirituality.