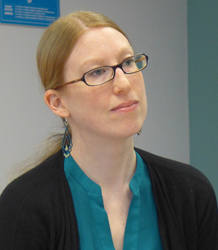 Elizabeth Williamson is a Research Fellow in Digital Humanities. Her research sits at the intersection between Renaissance literature, historical enquiry, archival studies and the digital humanities. Her interests include early modern archives and epistolary culture, especially in a diplomatic and governmental context; the practical and theoretical concerns of the Digital Humanities; and textual scholarship and digital publication. Before joining Exeter she co-edited documentary editions of thirty plays by authors other than Shakespeare for A Digital Anthology of Early Modern English Drama at the Folger Shakespeare Library.

Her first book, Elizabethan Diplomacy and Epistolary Culture, delves into letter-writing, information gathering, and intelligencing in Elizabethan politics, across the early modern and digital archive.

I work within and between literary, historical, and digital texts and approaches. My research focuses on early modern epistolary culture and manuscript circulation, particularly the preservation and transmission of letters in early and later archives, and the place of the digital in primary source management and research. I have a strong interest in digital editing, textual scholarship and palaeography, as well as early print and book history. My doctoral thesis focused on Elizabethan diplomacy as it relates to the gathering, transmission, and preservation of political information, situating letters and letter-books both as bodies of political information and as the socially embedded and self-interested epistolary output of specific individuals. I have also worked on less canonical early modern dramatic texts.

I have been developing my DH skills and profile over the last decade, and have expertise in text encoding as well as a wide appreciation and enthusiasm for a variety of digital approaches. At the Folger Shakespeare Library I co-edited and encoded the earliest surviving print edition of 29 non-Shakespearean plays, and produced teaching and learning resources to help scaffold these documentary texts for scholars and students: A Digital Anthology of Early Modern English Drama (EMED) was joint winner of the RSA's inaugural Digital Innovation award. I take encoding to be a form of editing and of scholarship rather than a mechanical process, and argue that the digital should be conceptualized as part of a text’s provenance – that is, embedded within continuous histories of textual remediation and representation. As well as supporting skill development at Exeter, I aim to help build critical conversations around what could be thought of as a new age of digital documentary texts, where advances in OCR and the release of EEBO-TCP texts (for example) are drastically increasing the number of minimally processed transcriptions available for research and re-appropriation. I believe that exposing the labour, decisions, and assumptions behind digital texts and resources, and inviting students and scholars of all technical abilities into digital conversations, should be part of research training and information literacy.

I have extensive experience in project management and digital resource creation, and was Digital Project Manager for Early Modern Letters Online (EMLO), where I worked with scholars, projects and libraries around the world to upload and curate epistolary collections. Such collaborative enterprises require communication and translation across different disciplines and knowledge levels, and I particularly value and enjoy this kind of cross-disciplinary creative work.

In my first book, Elizabethan Diplomacy and Epistolary Culture, I argue that a new focus on the central activity of information gathering allows us to situate diplomacy in its natural context as one of several intertwined areas of crown service, and as one of several sites of the production of political information under Elizabeth I. Close attention to the material features of these letter-books elucidates the environment in which they were produced, copied, and kept, and exposes the shared skills and practices of diplomatic activity, domestic governance, and early modern archiving. This archaeological exploration of epistolary and archival culture establishes a métier of state actor that participates in – even defines – a notably early modern growth in administration and information management. Extending this discussion to our own conditions of access, a new parallel is drawn across two ages of information obsession as I argue that the digital has a natural place in this textual history that we can no longer ignore.

As DH Research Fellow I divide my time between my own research, teaching and training, and supporting and advising DH projects. Get in touch with me by email, or say hello on Twitter @earlymodernpost.

I am keen to hear from any students who wish to discuss research proposals within my field of expertise. I am especially interested to work with students wishing to work between early modern studies and the digital humanities, particularly early modern and digital archives, manuscript studies and text technologies, and textual scholarship and digital publication. I would be happy to hear from those interested in early modern diplomacy and epistolary culture.

I work with the Digital Humanities team to teach a variety of staff and student training courses and workshops, in addition to teaching the undergraduate course Rethinking Shakespeare. To sign up to workshops or for more information, please contact digitalhumanities [at] exeter.ac.uk.

Please email me to sign up to office hours: e.r.williamson [at] exeter.ac.uk.