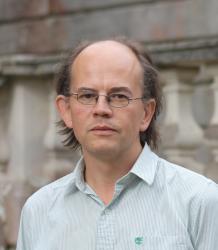 Associate Dean for Research and Knowledge Transfer, Professor of History

My historical interests are focused on the period between the Black Death and the Break with Rome. While a medievalist by training, I explore themes in religion, intellectual and cultural life which reach across the traditional boundaries of medieval and early modern; likewise, my approach is informed not only by the sources and methods of the historian but also by those of researchers in literary, artistic and material culture.

My research explores religion, learning and book culture in England (especially) between the Black Death and the Break with Rome, a period traditionally disparaged as lacking both the vitality of the high Middle Ages and vision of the Renaissance. My work seeks to unsettle – sometimes to challenge – this old orthodoxy, offering new insights into institutions and individuals, patterns of writing, reading and thought, drawn from the rich (but still somewhat neglected) body of archival, literary and material sources.

I welcome doctoral proposals on any aspect of church, intellectual and religious life in the later Middle Ages and pre-Reformation  period. Particular interests include (but are not confined to) monastic culture, the universities after Wyclif, the reception of the classics and the production, transmission and reading of books in manuscript and early print.

I am a regular contributor to TV, Radio, News Media and online coverage of medieval, Reformation and early Renaissance themes. I have been historical consultant for TV documentaries such as Tudor Monastery Farm for BBC TV and film dramas such as Starzz The White Queen. Most recently I have contributed to a 2-part documentary on Thomas Cromwell and the Henrician Reformation presented by Tracy Borman for Channel 5.

My training in medieval and pre-Reformation history began as an undergraduate at Bristol under the guidance of Anthony Tuck, Ronald Hutton and, briefly, when a visiting professor, Geoffrey Elton. It was continued at New College, Oxford, where I completed a DPhil under the supervision of Jeremy Catto. As a Junior Research Fellow and British Academy Posdoctoral Fellow at Brasenose College, I remained in Oxford until 2001. I joined the History Department at Bristol in 2001/2, progressing to a personal chair in 2010/11. I came to the History Department at Exeter in April 2013. I was elected a fellow of the Royal Historical Society in 2008. I am a founder member of the editorial board of the Journal of Medieval Monastic Studies (Brepols). In 2013/14 I held a Visiting Professorship in Medieval Studies at the University of Illinois at Urbana-Champaign. From 2015-21 I held the role of Associate Dean for Research & Impact in the College of Humanities.