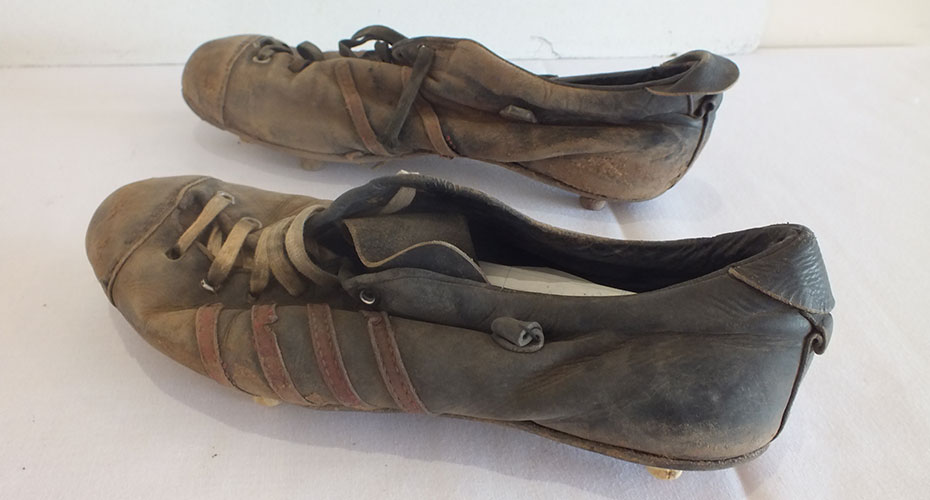 These boots were used by Exeter City footballer Arnold Mitchell for five or six seasons, from the late 1950s until 1966 when he retired. Arnold’s son David recalls their origin.
They came from a shop called Gray’s in Sidwell Street. When they needed repairs, they were taken to the cobblers next to the George & Dragon pub on Blackboy Road. They are believed to be Jimmy Greaves-style boots (the top striker in the country at the time they were made).

Players used to buy boots half a size too small, and then wear them with bare feet and stand in a bucket of water to stretch the leather and mould it to the shape of their feet. The thick leather of the boots had to be treated with dubbin because it soaked up water, although the dubbin then rotted the laces. These boots had screw-in studs, whereas older boots had nailed-in leather studs.

The boots still have the mud from the pitch of the final game that Mitchell played in Exeter before he retired (and mud from an additional away match at Reading).
Mitchell played for Exeter City FC from 1952 to 1966, and during this time became their record appearance holder. Over his time at the Club he played in every position on the pitch, including goalkeeper.

The Grecian Archive project is engaging the local community to explore the history and heritage of Exeter City Football Club, collecting memories and objects from the Football Club, the Supporters Trust, and local people.