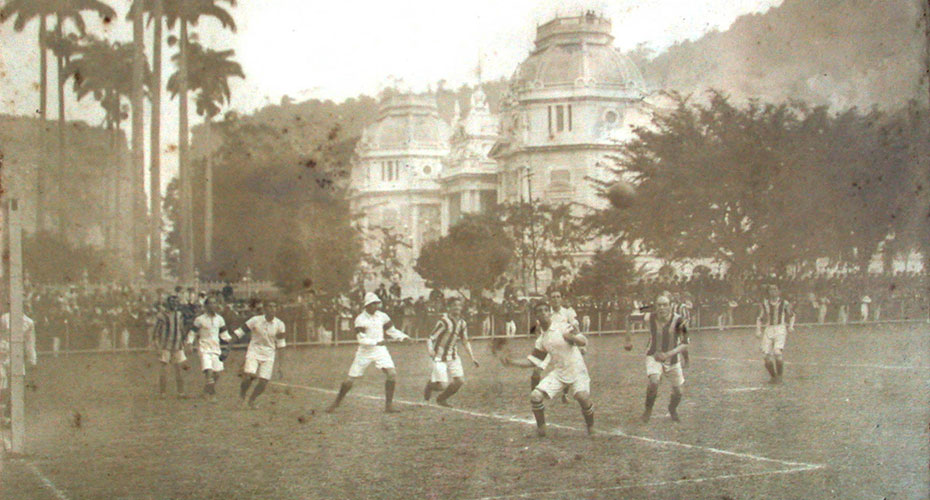 As unlikely as it sounds Exeter City Football Club was the first team to play against Brazil, during a tour of South America. This ball comes from that historic trip.

In 1914, ECFC were chosen by the FA to represent English professional football abroad in Argentina. On route the squad stopped off in Rio, having set sail from Southampton aboard the SS Andes, and it was here that matches against Brazilian teams were organised for the return journey.

For the last match, a team was put together with players from rivals Rio and Sao Paulo, creating the ‘Seleção’ (the selection), which remains the Brazilian national team’s nickname. Around 3,000 spectators watched the game at the Estadio das Laranjeiras.

The Brazilians were excited to play against a professional English team, and revered them as the inventors of the sport. Nevertheless, with goals from Oswaldo and Osman, they beat Exeter 2-0 in what was to be the first game of the national Brazilian team.

From analysis of the ball, contemporary materials, and oral testimony, we believe that ECFC’s first opponents in Argentina (Argentine North) presented this football to the team, and that it accompanied them throughout the tour all the way back to Rio.

It then continued its journey by being brought back to the UK as a souvenir by goalkeeper Dick Pym, whose son, Richard Pym, donated the ball to Exeter City Football Club just over 100 years later.

This is one of the items collected by the Grecian Archive project, which is engaging the local community to explore the history and heritage of Exeter City Football Club, collecting memories and objects from the Football Club, the Supporters Trust, and local people.