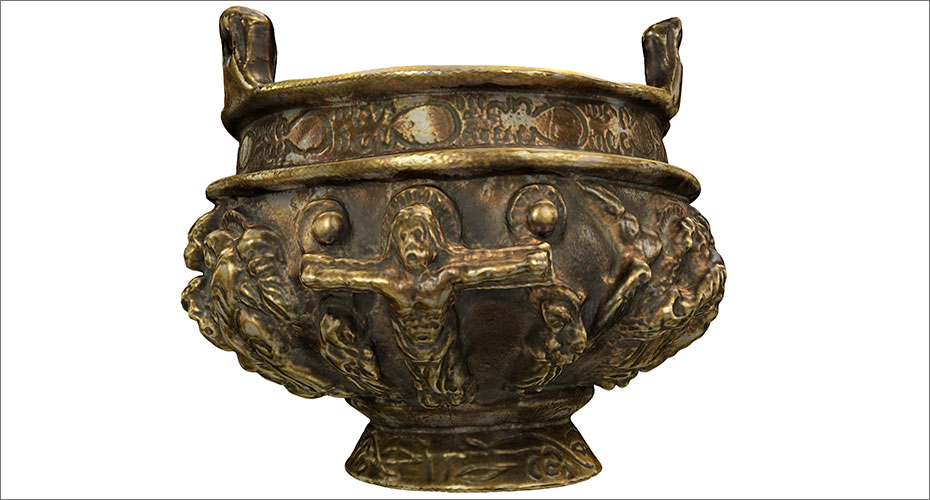 This censer is a copy made by a Syrian coppersmith of a censer held in the British Museum.

The original censer comes from the monastery of Deir Mar Musa al-Habashi near the town of an-Nabk in Syria, located in the Qalamoun mountains approximately 90km north of Damascus. It was taken by explorer Richard Burton in 1870. On Burton’s return to Britain in 1872 the censer was acquired by the British Museum, where it has remained ever since.

The Deir Mar Musa censer is made of bronze and has chains of twisted copper wire with bells attached in order to jingle musically as the priest swung the object. It was cast with relief scenes from the life of Christ both in a frieze around the exterior of the object and on the underside, making the bottom scene visible to those who looked up as the priest censed them. The base also has an attractive floral pattern that was incised after casting with a sharp implement.

The Mar Musa censer can be used as a pictorial guide to the life of Christ beginning with the Annunciation, a scene where the Virgin and Archangel Gabriel appear be joining hands or passing an object from hand to hand. This is followed by the Nativity where the Virgin lies at an angle across from the manger holding the infant Christ, and then by the Baptism of Christ, with the Holy Spirit descending as a dove to Christ who is flanked by John the Baptist and a winged angel. A Crucifixion scene depicts the Virgin and the Beloved Disciple at the foot of the cross and the sun and moon above it. Finally the scene with the women at the Sepulchre shows two women linked in a manner similar to the two figures in the Annunciation standing by a domed portico surmounted by a cross. The base has an image of the enthroned Virgin that would have been visible to the faithful as the priest swung the censer in their direction.

With a small group of similar artefacts, it can tell us much about the artistic and liturgical traditions of the Syrian Church. The exact date and provenance of the censer must remain unknown, but all we can say is that it is possible that the object was in use in

Deir Mar Musa for over a thousand years before it was lost and rediscovered by Burton.

The first significant point regarding the censer is the rarity of this item. The region has suffered constant political upheavals and invasions. Items important to one group may have been more valuable as scrap metal to another. Therefore pillaging was a problem and many such objects would have been stolen and melted down during the waves of invasions by various warring factions. Remarkably few liturgical objects have survived and the age of this censer, which could on stylistic factors be placed anywhere between the 6th and 9th centuries, makes it especially interesting.

Today it has a particular significance for the contemporary community resident at the monastery as they attempt to restore the foundation both physically and spiritually. For all those interested in the art and archaeology of Syrian Christianity on a more general level, the censer is a rare figurative object made as the Syrian Orthodox Church was breaking away from orthodoxy as defined by the Council of Chalcedon.

This version of the censer was given as a gift to Professor Emma Loosley by the Community at Deir Mar Musa al-Habashi, in return for raising the money for a facsimile of the original censer to be presented to the modern monastic Community and returned to the place from which it was stolen. It was based on the facsimile of the censer, so is a copy of a copy. The original is still held in the British Museum.