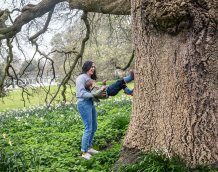 Families in Exeter navigating the challenges and joy of working alongside bringing up children have told their stories as part of a new exhibition.

“Portrait of a (Working) Mother” is a series of photographs and interviews which show the pressures of family life and the impact parenthood can take on careers.

Twelve parents were photographed and interviewed about how they find a balance between family life and work. Many had moved to Britain from abroad, adding complexity in how they navigate these issues. Their stories are told in text accompanying the photographs.

Kathryn, a primary school teacher with two children originally from the USA, is photographed with her son in a park. She explains how she and her husband have supported each other at different points in their careers through their job choices and working part time.

Lucie, who is French, discusses decisions made about shared parental leave in her family and the impact maternity leave may have had on her career.

James, who has two children, explains why he took parental leave when his wife went back to work while Katarzyna explains why being self-employed has given her a better quality of life with her family.

Katie discusses life as a single parent and running her own business.

Professor Maguire, who tells her own story as part of the exhibition, said: “We hope many people come to see these beautiful pictures and read the stories of those who kindly agreed to be involved. The photograph and captions are designed to make people think about motherhood and the social and career costs it can entail. Some of our subjects have also coped with the added complication of being migrants and living somewhere new to them while bringing up a family.”

The exhibition is on display at the University of Exeter’s Forum building until May 24 every day from 8am until 8pm. It will then be on show at the Devon and Exeter Institution in Cathedral Close from June 14 until August 5 on Tuesdays to Fridays from 10am until 5pm, and on Saturdays from 10am until 4pm.