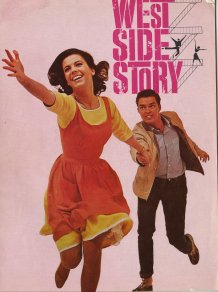 Musical treasures from West Side Story, The Pink Panther and Breakfast at Tiffany’s on show as part of Bridport’s From Page to Screen Festival

Some of the best-known music from films, including The Pink Panther and ‘Moon River’ from Breakfast at Tiffany’s, is on display as part of Bridport’s From Page to Screen Festival.

A rare original programme from the film King Kong also forms part of the exhibition at the town’s Arts Centre.

Artefacts have been loaned from the Bill Douglas Cinema Museum at the University of Exeter and there are displays on sheet music and soundtrack albums, as well as items related to the films being shown in the festival this year, which has the theme of music and film.

The festival, which shows both new releases and timeless classics, and is this year curated by Edith Bowman, begins on 27 April and you can find the programme here.

The exhibition features items from the Bill Douglas Cinema Museum collections on the classics being shown at the festival, including King Kong, On the Waterfront, sheet music, and postcards from the original film of West Side Story, Shaft, Fellini’s Amarcord, Hitchcock’s The Lodger and Indian classic Pather Panchali

Also on show is memorabilia produced for Disney’s Pinocchio including the original 78rpm albums, and branded Christmas lights from the 1940s release.

There are also displays of both sheet music and records from the museum’s collections. Films featured include The Jazz Singer, The Piano, The Third Man, The Wizard of Oz, Butch Cassidy and the Sundance Kid, Cabaret, Working Girl, Mad Max, The Graduate and Charlie Chaplin tunes from over a century ago.

The exhibition is now open at the Allsopp Gallery at Bridport Arts Centre and will be free to the public until the end of the festival in early May. The Bill Douglas Cinema Museum’s own galleries will be free and open to all through the Easter holidays, where you can explore other parts of its amazing collections on the history of the moving image.