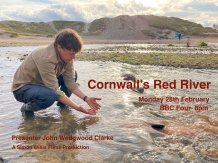 The project is the now the subject of a new BBC4 documentary to be shown next week, which features Dr Clarke travelling the seven-mile length of the river taking in stunning landscapes and romantic mining ruins.

A new documentary by a University of Exeter expert celebrates the unique Cornish Red River – a powerful symbol of the county’s identity.

Writer and researcher Dr John Wedgwood Clarke, from the University of Exeter has traced the history and biology of the Red River as part of a major project to change people’s idea of what is considered to be beautiful, and help more people develop an emotional connection with nature.

The project is the now the subject of a new BBC4 documentary to be shown next week, which features Dr Clarke travelling the seven-mile length of the river taking in stunning landscapes and romantic mining ruins. He pauses to remember and reflect on the damage that mining has done, speaking to University of Exeter colleagues about the biodiversity of the river.

The Red River has a personal connection for Dr Clarke, who grew up in St Ives and surfed at its mouth as a teenager when it was a dumping ground for mine waste staining the river red.

Dr Clarke said: “The pollution is part of me and it’s part of Cornwall...It’s eloquent. It tells me we have done great things but we’ve done them at great cost to the environment.”

The film explores John’s mixed emotions. He discovers an old mine drain that is still pouring mine waste into the river and walks through it.

He also meets local people passionate about the river – its past and its future. People like Steve Jones who has helped preserve old waste settling areas fed by the river as a haven for dragonflies   – featured in superb wildlife photography. Retired miner Jon Nurhonen remembers how the red iron oxide pollution would drench the underground workers – getting everywhere “including places where you didn't really want it.”

Dr Clarke reads extracts from his poem inspired by the Red River along the way . At the river mouth at Godrevy he washes his hands in the red stream . It leaves him “a local stranger , nostalgic for pollution”.

In places the river is tamed , brutalized even and forced into culverts. We see John writing his poem as the river runs under the A30 through a concrete tunnel . Millions drive over it every year unaware they are driving over Cornish history. Storm overflow water including sewage is also periodically allowed into the river.

But despite current pollution problems there is some good news. A team from the University of Exeter, including Dr Jamie Stevens, have been studying brown trout on the river . They've shown that the trout have genetically adapted to centuries of metal pollution – surviving where trout from other areas would struggle. The documentary features the Red River rescuers restoring Bell Marsh near the river a haven for rare wildlife and a balm for stressed souls.

The Red River project was part funded by the Arts and Humanities Research Council who also part funded the film.

The end of the documentary features Dr Clarke at Godrevy beach where he explains how the project has challenged him as a poet and a Cornishman to make sense of the human damage to the environment in Cornwall. He says: “Sometimes the river seems traumatised by what we’ve done to it.... But I think it’s really important to listen to these damaged places and what they tell us about our attitudes to nature because we’ve all left our mark on it in one way or another."

Cornwall’s Red River will be shown at 8 pm on Monday 28th February on BBC Four. It’s made by Plymouth based Simon Willis Films and was entirely shot in Cornwall.