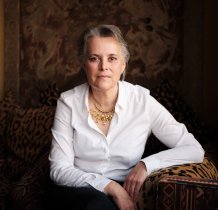 In 1980s Eastern Europe there’s limitless luxury for the privileged few but limited freedom, while the UK offers terrible food and cold homes – but without hidden cameras.

The lauded new novel from a University of Exeter academic recreates the heady days of Thatcher’s Britain and life in a Soviet satellite state in the last years of the Cold War.

Vesna Goldsworthy is an acclaimed novelist, memoirist, poet, former BBC journalist – and University of Exeter creative writing professor. She is the author of six internationally best-selling and prize-winning books translated into sixteen languages. Two -- Chernobyl Strawberries, a memoir, and a novel, Gorsky -- were serialised by the BBC. She writes in English, her third language.

Iron Curtain, partly inspired by memories of Goldsworthy’s own arrival in England from the former Yugoslavia, tells the tale of Milena, a “Red Princess” daughter of a leading figure in a communist regime. She falls in love with Jason, a confident British poet, and secretly escapes to Britain. London is not what she expects and her life is impoverished. Their rented flat is grim but she is with the man she loves.

It is a love story with a twist, with humour emerging from cultural differences. Milena finds it hard to tell rich from poor as the upper middle-class families she meets live without the home comforts universal in her impoverished homeland.

Goldsworthy’s examination of a cross-cultural marriage gone wrong is designed to echo the story of Medea. Later in the story a key character is a University of Exeter alumna.

Professor Goldsworthy said: “The story may not be autobiographical, but the setting is. I wanted to recreate this era as I experienced it, coming from a communist country. Milena’s homeland is imaginary, a composite of ingredients from Poland, Czechia, Slovakia, Hungary, Bulgaria and Romania, with dashes of former Yugoslavia. I contrast it with 1980s Britain and show how Milena encounters both those worlds, hopefully turning a few stereotypes on their heads.

“This was a period before we knew the Berlin Wall was going to disappear. It seems so obvious now, but nobody – experts included! -- knew how soon the Iron Curtain would be gone.”

So far, the book has had rapturous reviews, and has been endorsed by leading authors such as William Boyd, Pat Barker and Rachel Cusk.

In The Times Ed Lucas described it as “a piercingly evocative East-West love story” while the Sunday Times said “The divided continent has been at the heart of countless novels over the decades, but few can have been as cleverly crafted or better told than Vesna Goldsworthy’s Iron Curtain…Goldsworthy’s finest novel so far, a brilliantly written and often witty exploration of its protagonist’s predicament”.  Rachel Cusk described the book ass “so full of steel and compassion that it stands glitteringly apart” while William Boyd has said it is “full of full of delightful intrigue and wry insight about the human predicament and its unique tensions.”

Iron Curtain: A Love Story by Vesna Goldsworthy is published by Chatto & Windus on 10 February 2022